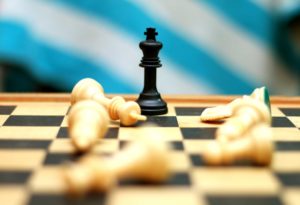 It seems like just yesterday that I was talking to Manik da amidst all the cacophony of the busy office locality of this Dalhousie area of Kolkata. We were sharing a laugh when Mr.Bose came out and started shouting, “Manik, stop gossiping and do your duty!”
And then, after Mr Bose would dart away from the scene,Manik da would look at me and give a tired smile.
“Go on, Chotobabu. Otherwise he will come back and say something to you too!’ (Yes he called me that, because I was the youngest in my office).I would walk away,smiling on my own.
I met Manik da, or Mr. Maniklal Kundu about six months after I joined that office. Wearing his blue shirt and black trousers, Manik da used to smile at us as we entered the office. Sometimes, he would even salute me( just to pull my leg)! He was surely one of a kind! I have never seen a man like him anywhere. “A security guard, Manik Da!”I would tell him time and again, ‘why are you doing a job of a security guard here? You deserve much more! Please, give other exams!”
He would just give a tired smile at me. ” Chotobabu , I have a wife, two daughters and three sisters to look after! It’s hard to balance study with three jobs! ”
“I’ll help you Manik da.” I said.” I’ll help you in anyway you need. Please give other exams, please!”
I still remember that day when,on my request, I had heard him to quote Shakespeare! The next day, I had went to the office only to hear that for some very personal reason, Manik da had resigned his job and went away.

It has been many years after I had last met him.There was no mobile phones back then to keep contact with each other. Deep inside, I knew the man was happy with his life. But, I had never, in my wildest dreams could have ever imagined what happened just today!
I got a call that the new commissioner sir was calling me to his office. He had taken up the charge of the office just yesterday. I went to his chamber and knocked on the door. Just after I had entered into the chamber, my jaw dropped.
“What the…!”
It was Manik da! Yes, our own Manik da! Yes he has got a bit older and his hairs have turned gray, but his skin was glistening like marble!
“How.. why… how did you Manik da! I mean, I heard that you had gone away to another state!”
Manik da laughed from behind his magnanimous desk.
“Yes, I did!After I got selected as an IRS officer, I was posted in Mumbai for twenty years now. Then I took this promotion with the transfer here to Kolkata! After all, home is home,right?”
I stood still in my ground, overwhelmed by the turn of the tables of time! There he was, sitting a few feet ahead of me was a man who, even two decades ago, had to go through three jobs to support his family; a man who had fought and came out victorious in life!
“Surprise!”
“So tea, Mr Ganguly?” he lowered his voice and smiled behind his thick dense moustache, “or should I say, Chotobabu? ”
I smiled at him.The cover an old book was lying at the edge of the table. And even from this far, I could properly read the words written in bold on top of it.
“The Hamlet!”
After all, it was my own handwriting!
—-The End—–

I am a singer-songwriter as well as an author. I have published six songs on my own, and have authored six books, of which five is coauthored ny five other authors and one of my owm single title. I write both in Bengali and English