A MOVIE WHICH INSPIRES AND MOTIVATES ME A LOT 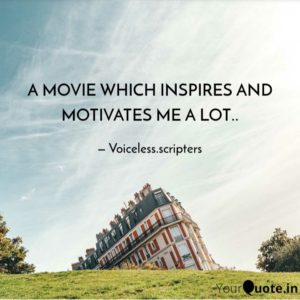 Hllo guys, this is Shubham Kumar. Today i’m going to narrate a movie story in my words  which really inspires and motivates many people infact it inspires me also alot.. I hope u guyss have watched CHHICHORE movie i am just talking about that movie onlyy. So i hope u guyss gonna like this post. I am admin of VOICELESS.SCRIPTERS my own write-up page on Instagram. Hey you! Yeah! You. The one who is studying so hard to get into IIT, its okay even if you don’t. You, who is practising day and night to get into the team, its okay if you don’t. You, whose story wasn’t selected for the competition, chodna yaar! Write another. Write for you! Should I start with J K Rowling? You, the one whose leg was fractured before you could play for finals, its okay. There is always another game. If there isn’t, thats okay too. All the while you played, you played great! You, the one who was so sure she’d get first but came 12th, its okay.You know what? Its okay to lose.See, its okay. Trust me, it happens and it is a big deal for you. But its okay. Sometimes no matter how hard we try, we lose. Not because we aren’t capable enough, but because it isn’t just our time.But what is worse is to not try. That is when you really lose.Saw who lost in the movie? The hero. Everyone else scored, but he lost. What if he lost? Is it a tradition that hero must save the day? He can lose too. Let him lose. He did his work. He thought he could do it, but yeah, he couldn’t. That doesn’t mean he is not worthy. He just lost, big deal huh? No. He did try and the entire universe salutes him for trying so hard. What matters is the courage you had, to try. The courage that it took you to work hard. And it did pay off they moment, your enemy saluted you. The moment They called you from behind, “Hey champs! Well played. No, really! Well played! For H4, boys!For the losers!”. Heard the entire stadium cheering for you? You are not losers anymore. You tried and you became the champs. Its that simple.And one more thing. Losers you call them? They had the most beautiful possession anyone can ever have. They had each other. Friends, that eventually became family. It is what most of us get, but as always, we take them for granted.But no matter how hard and well you study and get admission in a well reputed “institution”, you’re gonna face life.In the end, when you end up in a hostel, seniors toh zaroor poochega, “Do you make urself happy?”…And trust me after watching this movie, you’ll laugh at that. Because then you’ll know ki, woh sawal , ek nayi zindagi ki shuruat hai. A life that you’re gonna love. A life that you’re gonna live. A life you’ll carry deep inside your heart forever..Now go, go make some memories, much more laughter and a small family. Because after all those markslists, internals, externals and ranklists, you’ll only have them to come back to. Those people, who’ll come by at 3 am in the morning when you needed them, those people who’ll never let you loose alone, them, who’ll accept you no matter how bad you are. Value them..Because they’ll all move away one day and some of them will become mere contacts in your phone and all these fun will become memories and life will happen and that will be it. No matter how hard you wish, it shouldn’t happen, there is no stopping it. Everyone will move away one day. So be here now. Have fun now..So go. Trust me when I say this, after 30 years, when you look back away from your armchair and medicines, you’ll need something to miss. And the feelings would be unexplainable. One must be lucky to have something so dear to miss, that it’ll brings tears in your eyes. Go on! Live. Make new friends. A new life. A fun life..Make your own family. So what if its a little complicated, small, and troublesome? Its still….Family❤️.I loved the movie. Its made me smile like a pagal in the end. And yes, I too lived in H4 and i wouldn’t trade it for the world.💫..I loved them all.Anni, Sexa, Mummy, Acid , Derek, Maya, Bevda, Raghav, even Raggie. Yeah, Raggie too. And I am sure you lid too. I love them all…Its a 4.9/5 for a feel good, nostalgic movie..

Hey, I am Shubham Kumar. By profession i am a student. I am the admin of VOICELESS.SCRIPTERS my own write-up page on Instagram. I am running this page with one of my best friend "HARSH VERMA".