A Tale of True Grit 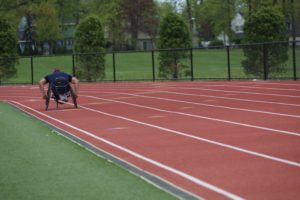 Sitting in her wheelchair, trying to understand why she was hit with such a huge dose of unfairness, Malathi felt that she heard a voice. “Listen, mother,” it seemed to whisper.

It meant something, she knew. It had to.

She didn’t hear things like this often. But how was such an abstract thought going to help her overcome the hurdles she faced over her crippling polio – disabled body, the society’s attitude, and her alienated feeling?

She recalled her parents reminiscing the first two years of her life, of a helpless baby ravaged by polio that left her paralyzed from the neck down, of electric shock treatments that helped her regain strength above the waist, but not below. How with a heavy heart, they had entrusted Malathi to the Orthopedic Centre in Chennai, which became her home for the next 15 years, where she studied, underwent surgeries and exercised hard to make herself stronger physically and mentally. This was when sports became a passion for her.

It was another world. Everyone she grew up with had physical disabilities. Dealing with pain, medical procedures and regular therapy was nothing unusual. Most of the children were from poor families and parents left them at the centre never to come back.

The fear that her parents too would stop coming one day.

It was a parade of painful, endless surgeries,  followed by even more painful physiotherapy sessions. Still, she had prevailed. But another fight had awaited her when she came back home. A fish out of the water, the odd one out, she had to deal with a society that looks down at the disabled.

Her father, her mentor, friend and advisor all rolled into one, told her only one thing, “If you want something, you fight for it.”

Never had she thought that the fight would be a Herculean struggle to overcome inferiority complex, negativity, and society’s rooted belief that ‘cripples’ belong in the fringes of the society.

But, she followed the voice. She just refused to give in to despair. Shuttering her crippling feelings, she reinvented herself.

The first time she realised that she had it in her was when she directly approached the principal of her college and got all her classes shifted from the third floor to the ground floor. Because by the time she climbed all those stairs, her classes would get over.

Her steps, or were they giant leaps? LIfe at Maharani’s College, Bangalore, her wins at the National Games for the Disabled, Mumbai which came to the notice of the authorities and won her a clerical post with the Syndicate Bank. Her medal haul which continued in her bank’s colours in shotput, discus, javelin, wheelchair race, and obstacle race – all played out in her mind, like a series of random shots.

Her first international competition – the 1988 Para-Olympics in Seoul altered her perspective. There, she had seen the difference professional coaches made to performances. Determined, she picked up cassettes by professionals and became their Ekalavya.

In a year, at the 1989 World Masters’ Games in Denmark, she won gold in 200m, shot put, discus, and javelin throw. She won the Arjuna award in 1996 and Padma Shri in 2001. Rajyothsava Award, Ekalavya Award, Dasara Award, Outstanding Disabled Sports Person in Public Sector Banks award, her list of awards is long.

Malathi smiled to herself, thinking of the irony. She had won most of those in a rented wheelchair.

Now at 59, she is still the fastest female Indian athlete in a wheelchair.

She thought of how the metamorphosis from Malathi in a wheelchair to Padma Shri Doctor Malathi K Holla, Arjuna Awardee with over 400 medals, as an extraordinary tale of grit could serve to help a million others like herself.Giving heed to that call from long ago, she started a nonprofit home for disabled children from rural India, in Bangalore.

The name of her organization? Mathru Foundation, naturally.

As she turns the last page of her biography, A Different Spirit, released in 2009, Malathi sighs contentedly. Looking back, she realises how her decision to answer a seemingly supernatural call to use her struggles to help herself and others changed everything and has been inspiring thousands of people to rise over their physical handicaps.

This is what Malathi told herself, “I don’t think I am a disabled person. Of course, I am disabled physically. But that is just one part of my body. My self-confidence is not paralyzed.”

I am someone who is always on the lookout for the silver lining. Passionate about reading and writing, a single day does not pass for me without learning something new. Curious to the core, I believe that man dies when his inquisitiveness dies.