A walk beyond incarceration

‘Poor.’ ‘Unfortunate.’ ‘Oh my god.’ Adjectives, hurled at him, does not pain him anymore. He understands it. The illness is not in him anymore. But it is in them who took a pity at him. It took so much of him to stand up to this dreadful monster. His life ran away with every little treasure that he was, once, too happy to hold dear.  The murkier phase of his struggle had taught him lessons turning his life around.

Sun was up, bright, glowing full size. It was peeking through the long chestnut tree. He looked up and smiled intently. The night of his life took a leave. He was then a full-grown sun. Raring to go. Forever. But, then, was it really the same it had been before 5 year? No.

‘Are you carrying the manuscript?’ an old man shook him from his reverie.

‘Ye-ah. Here it is’ handing him his story to the publisher, he stood up.

The publisher dropped out of his sight behind a curtain. He took a newspaper kept before him on a table. ‘Wife filed divorce for domestic violence’. A news drew his eyes to it. His memory crawled back in time. His wife, Sohag, wanted to travel abroad. She wanted to settle in Europe. It was on a gloomy night that her dreams broke into pieces. The word cancer was too heavy for her to take in. Sohag, failed to fight along with him, decided to leave him alone.

He actually went into war much later. For him it was much severe to keep losing aids than each chemotherapy session he was put through. The day before she left him was a bright sunny Sunday. He packed her bag, put her cosmetics in it and looked intently from the window when her car stormed out of the lane. Perhaps, a drop of water slipped through his rugged jaw.

The battle to defeat this monstrous curse had been not so easy. It took away everything that he wanted to build his life on.

Those countless nights haunted him when the dark corner of his room sheltered his soul. However, there was something that shot in him the courage and endurance from the beginning. The day was still afresh in his mind when he had decided to pour his story in a diary. His battle wrote an inspiring chapter of life. He might not have died but was reborn.

‘Sir, we have decided to publish it.’ The old man was in front of him. ‘Seems a good story. Let’s the readers bless you’. He shook his hand and went back inside. Another time, he would have drowned his hope in a big river. But the new man in him knew that tomorrow would be a new day. Tomorrow, there could be a new beginning to his hope. Bagging his small folder, he came out of the office. His quest to find a publisher for his story, finally, ended.

It was again a sunny morning. He was asleep when his phone woke him of his sleep. The book was out in the market. His phone must have pulsated infinitely. Eyes moistened when he scrolled through it. ‘A walk beyond incarceration’ by Justin Dutta. The cover of the book fluttered in an early breeze. 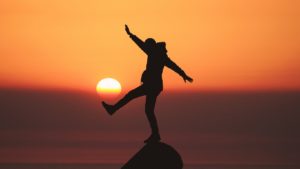