In near future, a new species of carnivores trees and plants are evolved, which started spreading rapidly all over the world. They have memories of their past lives, psychic ability like telepathy and they can be able to protect themselves with the help of their sharp, long and strong tentacles.

Voice echoing, ‘You don’t deserve to live. You are killers. You killed us.’

Kunal screamed, ‘Run, Run.. Don’t stop.. They are messing with our brains.’

Kunal and his friends are running in the forest in order to search plain, but they can’t able to see anything except tress. All his friends killed by them.

And at last one of them captured kunal.

Kunal, ‘Why are you doing this to us? We are innocent.’

And that tree put one of his tentacles on kunal’s forehead..

And that tree showed him with the help of telepathy.. How they were connected to each other and used to talk with the help of electrical impulses! How they had same circardian cycle and heartbeat, which had similar purpose like humans, resting at night and pumping fluid throughout their body! How they used to share their food and nutrients with each other selflessly, when anyone of them lack of it! How they used to take care of baby plants until they are ready to prepare their own food! How they used to detect their neighbour illness and started treating them with an antibiotic compounds with the help of their extensive network of beneficial fungi! How they used to produce mustard oil in their leaves and chemicals like tannin, anthocyanins etc. when they used to hear feeding vibrations, to protect themselves against predators! How they were living a happy life, before humans came in their life! They started killing them with chainsaws and an axe’s for their sole purpose. How could they want to help each other, but they were so helpless! How they tried to fill their wounds with the help of traumatic acid! How they tried to save themselves from bacterial infections with the help of jasmolic acid and salicyclic acid! But when they came to know that they couldn’t. They started releasing green volatile compounds and asked for help. But no one came forward to help them, neither animals, nor birds, nor humans, except some predators who were attracted by that odour and fed them. They felt very disappoint that for whom they devote their whole life giving oxygen and food, selflessly.

Today, they wanted to take their (trees) lives.

And that tree removed his tentacle from 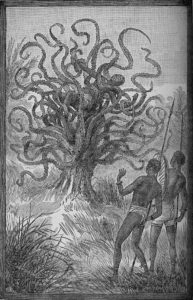 kunal’s forehead. Kunal have tears in his eyes.

He said, ‘I understood what you wanted to show me. You are a living being and you have a life too. You’re right. We really don’t deserve to live. We are killers. But, we are sorry.’

Tree answered by telepathy, ‘You were too late to understand this.’

And the tree severed kunal’s head.