Skip to content
Home/Inspiring Story/And this is how I stood up by my own.

And this is how I stood up by my own. 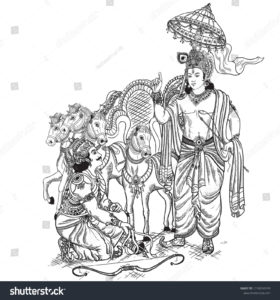 This shloka has made me understood the purpose of life for better. As it says,
“Do your duty and detach yourself with the outcome, Do not be driven by the end product, Enjoy the process of getting there.”
This made me realised whenever I engage in a task, I work on it with my whole focus on the task rather than dividing it by expecting and wondering about what will I get out of it. It changed my way of thinking for good and the best part is enjoying that moment while performing the task which taught me many things.

I believe it is a continuous journey between the outer world of relationships and the inner world of thoughts and emotions as a human socially connects as dharma, yagna and yoga. This connects the architecture of the world we inhabit,composed of the tangible and the intangible both within and around us as atma,deha or karma. A tug-of-war constantly ensues between inside and outside. As long as we moha we are trapped, As soon as we let go, we moksha. We become independent and content in our own company yet generous and dependable for the other. Lord Krishna has used valiantly beautiful metaphors to let Arjuna seek meaning within the word,the soul within the body, the metaphorical within the literal.Tryouts to control the world around us, make it predictable is all I ever wanted until I came to know karma is all about acting without seeking control over the outcome, Nishkama karma.
As a human being we have a special instinct, sense other people’s even strangers, hunger and fear, creating resources to provide for and protecting others.This ability enables dharma and failure leads to adharma. Animals and plants have no choice but to follow their instincts. I got a choice and this provides me a chance to choose between the above. We can act out of desire,duty or care but controlling is out of our hands.
Recognising the reality of our own fears we can appreciate ourselves and the surroundings forming a pillar of trust. These beings are not ‘out there’ in the world,very much ‘in here’ in our minds. Earlier in Srimad Bhagvad Gita, God was a concept but as I came through I realised God(Lord Krishna) became a character in human affairs who with his own words has described the whole humanity that resulted in victory of Pandavas and defeat of Kauravas neither raising a single weapon but as a charioteer which showed us as an emotional creatures with sentiments but not by virtue. Acknowledging, appreciating and accommodating is a means of expanding our worldview not through someone’s eye but ourselves.
Guna determines our body and our personality. Karma determines the circumstances of our life. But we have the power to create our own identity, Kshetra which comes from within not without.
Wisdom shall be beared what we are supposed to and not by wanting to bear the fruit that we cannot bear. Connection with property follows violation, making us detached from atma later ends with violence. Liberation, essentially is letting go of our insecurities that disconnect us from others and generosity.

त्रिविधं नरकस्येदं द्वारं नाशनमात्मन: |
काम: क्रोधस्तथा लोभस्तस्मादेतत्त्रयं त्यजेत् ||
There are three gates leading to the hell of self-destruction for the soul—lust, anger, and greed. Therefore, all should abandon these three.
Lust, anger, and greed bring about self-destruction as said by the lord. Sins are vices that appear to work and but actually do not. They are like a mirage and you often will find yourself diving headfirst into concrete looking for water. It takes many people years to realize that sins do not work and that is the job of religion to give people the correct guide to live.

Srimad Bhagavad-Gita is not a theory to be internalized and applied in a psychology. A process consisting of many small steps along the way of practice and understanding as long as we live.

A dentist with a pen and paper.