Because humanity is priceless

There’s a saying-A single gentle rain makes the grass many shades greener.But what if the same rain soon transforms into wrath of nature.

My story is along the lines of incidents many have read and wrote about.The floods of Mumbai, 2006.

The day Mumbaikars had to face the wrath of nature.The day, Mumbaikars stood united, in true sense, as one big family.

I was in grade 2.Out of all the days, that was the one day I wanted to go to school because it was my friend’s birthday and I would get to eat more chocolates than the rest of the class. Being the stubborn little overenthusiastic kid that I was, I wouldn’t listen to anyone who told me to skip school that day. I got to school only to realize that my friend was absent.I was obviously upset and hadn’t paid much heed to the fact that it was raining outside and I had forgotten to carry my umbrella.
“What’s monsoon in Mumbai without a little rain?” everyone around me joked.
I remember going to the staffroom to submit some notebooks for correction when I saw that my professor was getting quite restless since it was raining showed no indication of stopping.The atmosphere in the staff room was getting worrisome and all professors looked worried.
Unaffected by the on goings in the staff room, we kids were having a gala time in the classroom,chaisng each other, climbing on tables and what not.
In a matter of minutes, one professor walked into the classroom and announced that the remaining classes had been cancelled and we were asked to go home immediately.All of us flew off our chairs with our bags on our shoulders and hopped down the stairs excitedly.Little did we know the sight downstairs was horrifying.
We hadn’t reached the last step on the stairs when we saw that water had already creeped up and our school buses were technically swimming in water.
All the kids were made to board their respective school buses when I realized that the school bus I was supposed to board was going to take a detour and wasn’t heading to my residence.I stood there, not understanding anything what was happening.As I saw all the school buses leaving the campus, I could somehow realize the seriousness of the situation.
But our transport manager, who, that day, was no less that a messiah to me.I,along with 3 other kids,were stranded in the school.We left the campus and had to walk all the way.I must’ve fallen into various gutters numerous times. But the manager, who himself had an injury, carried me all the way because I couldn’t walk properly due to many bruises on the heels of my foot.
Those were the days we didn’t have cell phones,and neither he nor I had money.
One random person allowed the manager to make a call to my mother and inform her about my whereabouts.
It was about 4 hours since we’d left the school campus, 6 hours since I’d last eaten.I was starving.A vada pav stall owner offered me some vada pav and another man gave me a sweater since I was shivering.A woman, handed me an umbrella since I’d forgotten mine.
These people who I would never see in my life again,went our of their way and helped others in need.7 hours after we’d left the school campus, I reached home,with bruises on my arms and legs, high fever.The following day, I was down with malaria.But more than that, I was eternally grateful to the manager who went beyond call of his duty and took care of me like a father until I was handed over to my parents.While some may argue that he was simply doing his job, I believe that he did more than what his job demanded.That day, I encountered numerous angels who helped others without any reason.
Ever since those floods, Mumbaikars become one big family during floods. 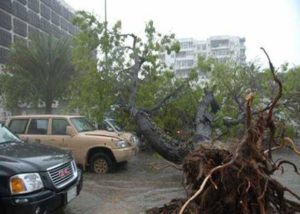