Character is greater than Money

Character is greater than Money 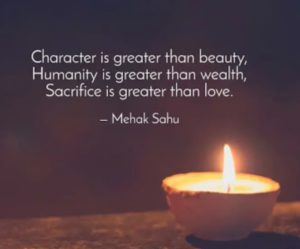 Devanapura was a village famous for rich people. A wealthy family lived in that town. Their house was very big. A couple lived in that house. The couple had two sons and two daughters. That rich man gave his daughters to two rich men. Even eldest son married a rich girl. Eventually youngest son was a loyal and good man. He loved a middle class girl and got married to her. But mother in law didn’t care her well. She had made her like a slave to the house, showing no mercy and affection. Once she remembered her father, mother and her hometown. So she expressed her feelings to her mother in law. But the mother in law behaved like a cruel lady, shouted saying “If you go there and sit who’s going to cook meals for us? Who’s going to clean our house? When she heard this, she was shocked and said elder brother’s wife is here she will do these works for two three days. That’s why mother in law replied “She is not a housekeeper, she is from rich family and we are taking her outside, so you need not to go anywhere stay here and work. Later she couldn’t reply so she went back to her work by shedding tears of sadness.

One day the last son purchased a Gold ornaments to his wife, and he gave that on her birthday. When mother in law saw this she got life time shock. That’s why she called her son and said “see your wife is still young, if she go out with this ring and chain someone will steal. So you give it to me I will keep in my locker and I will secure it. The son had great love on his mother so he handed over that gold to his mother. But his mother sold it and secured the money. When son asked She gave so many reasons and escaped. After few days later, the Elder son’s wife became pregnant and gave birth to a baby boy. After few days later even her daughters also conceived and gave birth to a baby boy, and now mother in law has had an end to double dhamaka’s happiness. However the last son didn’t have children. So mother in law everyday started to tease last son’s wife. That’s why that poor lady started to wandering everywhere, worshiping God and finally God rewarded for her prayers. Which means even she was pregnant and gave birth to a baby girl. When mother in law heard this she got another shock. So she didn’t allowed last son’s wife to go for any kinds of family programme and party. Once unknowingly she went to a family gathering, mother in law got angry and she sent out that poor lady out of that house. In the heavy rain and thunder storm she went back to her house and shared this matter with her husband. He consoled her and he supported her in other activities.
A few months later, mother in law reached to her last days of her life. All children came to see their dying mother and they asked “Mom you are in a dying state. Who will cares about all these properties of yours now. So give me that property I will maintain, Eldest son asked give me your Ornaments”. But youngest son and wife said don’t worry mom we will be with you. We will take care of you. Finally she realized her mistakes, she apologized and closed her eyes.

Thanks for being inspired!!

I love inspiring others.