CHICHU – The emotions not all humans felt.

PROMPT: Chichu is a story about a community of people with different mentality versus an innocent monkey baby. This story contains 4 main dramas which include. The journey of a monkey baby which escapes from a zoo, bonding between animals and 80 years old women, Granddaughter of this old woman who fights for the animal rights and misunderstanding between an angry father and an innocent little girl. These four dramas have an interlinked screenplay with a message. 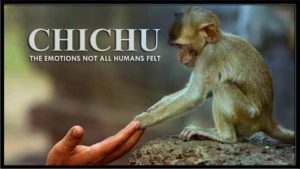 The story starts with a research lab that is running secretly behind in the zoo. An experiment on making a capsule that can develop the blood cells with fast the accurate rate is conducted in the zoo. It is been tested on few animals in the zoo unofficially. The zoo people used to test it on a pregnant monkey. Surprisingly the monkey gives birth to 3 monkey babies. An old lady who stays with her dog ludo in an apartment is shown, her family stays away in another city. She keeps calling to all her children and grandchildren every night. A busy father who really loves his family but doesn’t show it out. Even this family stays in the side flat of the same old lady.

Everything goes well but after a few days the parent monkey dies and they plan to test it on 3 monkeys at a time. A monkey among the three escapes from the zoo and keeps running on the road. A car meets an accident due to the monkey. The family with the angry father were seen in the car. It seems a minor accident but his wife suffers from a fracture.

The very next day this monkey baby is seen in the balcony of the old women flat. The old women understand that it was starving. She puts some fruits and takes care of it. Those were days when this woman even forgets to call his children due to this monkey and her dog. This little girl of the angry father likes dogs but her father doesn’t want her to go to this old women’s flat. Even though she goes and play with the dog and the monkey. They name the monkey a chichu. Chichu and ludo become good friends. The little girl secretly brings fruits from her house without knowing to her dad. She acts as it she ate the fruits.

It seems good until the apartment people don’t know that there is a monkey in their apartment. As they knew each and everyone starts opposing to send it out of the apartment as their children may have a treat from the monkey.

Finally, the angry father calls his brother in law who works in the same zoo to take the monkey back to the zoo. This old woman calls her son and granddaughter for making them understand the situation clearly. But they pull the monkey forcefully and takes it to the zoo. The little girl gives the number of her father in law who took the monkey. As this family demands the monkey as their pet, zoo people claim that it escaped from the same zoo and they are welcome to see their monkey any time.

Days pass, slowly the monkeys get weaker and the zoo management don’t even cares. Then the granddaughter of the old woman takes the monkey to the hospital and finds the exact situation of chichu. But the chichu and 2 other baby monkeys dies. She starts a protest against the zoo authorities knowing about the experiments they were doing and send them to jail.

The old women seem to be so sad and the dog keeps crying. The little girl who doesn’t even asks his father anything says his father that – Dad you are the one who led chichu die. A good dad is only one who wants his children to smile but you made us cry, I hate you, dad.

Even her dad gets tears by the end. He really cares about his daughter but he could not except this to happen. And the story ends with eye drops of this angry father falling on his hand which has a dog bite in his childhood.

END LINES– Chichu may die but he brought a voice from the little girl who has fear of expressing something to his father, a better way to make other animals safe in zoo from the old women daughters protect and mainly a realization of the father who comes to know that spending time with this child can bring a smile in him.

This was a story inspired by real-life and it is improved with a better conclusion.