PROMPT: What if a serial killer kills the people who make research on serial killers. It’s a turn of a psychology student who makes a study on killers and their behavior. Will she die or will she teach a lesson to the killer?

STORY:
A 22 years old girl named jahnavi is a psychology student who does research on killers and the main cause which turned the killers to do so.
She gets a call from her mom asking when she was coming back to home. She replies that she needs to complete her work as soon as possible and return to the home town early.
She has a habit of reading books. That too stories which were written by a Dr.Vikram, who writes stories with many different psychological issues of people.
Jahnavi seems to be harassing by a guy named Aditya, who doesn’t talk to her directly but he used to be calling and sending gifts as he is loving her. She takes it seriously to observe his mindset when she refuses him.
She gets Dr. vikram’s number and calls him to explain about her problem with the guy and what was his mindset works in. Vikram doesn’t make a huge statement over a normal guy who sends such gifts. He says it’s fine.
But the next day she gets a gift which is wrapped with a human finger in it. Vikram says that she should go to safe place and he explains some situations where people do such things. Jahnavi thanks him for explaining all those and she ask Vikram to give her an appointment. And Vikram says okay.
Next day. Vikram gets a message from jahnavi. “Sir please save me”. Seeing the message and location link Vikram runs and starts his bike. As he reaches her home. She seems to be bleeding in the hall. He hears a sound from the bedroom and runs towards it. But he finds nothing except few research papers and diary on the floor.
He calls an ambulance but jahnavi dies during the treatment. Vikram keeps on studying about the research papers and her diary. He confirms that she was suffering from some mental problem. Which led her to think as if there is someone who keeps fallowing her. And it would be a suicide. Vikram writes a book on jhahnavi’s death stating that it’s was a psychosis death.
After few days Vikram meets a random guy who read his new book and asks him, why did she kill herself. Will it happen in real life also? Vikram moves on saying it’s just a story and thank him for reading his books.
Here comes the main twist where vikram’s room is shown properly. Vikram’s full name was Vikram Aditya. His room is filled with all people who were killed by framing a reason to be a psychology problem within them. And Vikram cross marks jhahnavi’s image with a marker. There are many people who were killed by Vikram. who don’t even know why it happened The reason was Vikram kills all the people who make research and wants to know about psycho killers. And Vikram frames the deaths as stories and write his books. And jahnavi story is his new book which is named as ERROR 27. That means it’s his 27th book and 27th murder.

END LINES– If you feel the guy opposite to you is strong, it’s not just because he is stronger than you, you are even giving your weakness as an opportunity to him. Be strong and fight as you can.
THE END 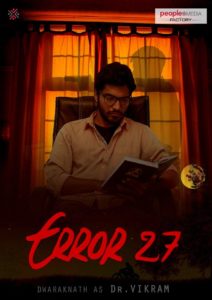 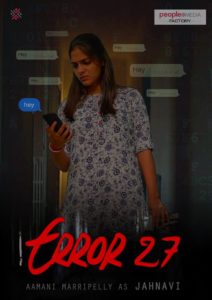