Give, Love and Inspire!!!

Give, Love and Inspire!!! 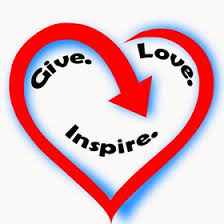 It’s a story of Ramesh. What he learned from his father has changed his entire perspectives on life. He belongs to a rich family. He lost his mother in his tender age. His father brought up Ramesh with utmost care and love. His father’s name is Karna. True to his name, he was very generous in charitable acts. He trusted people who approached him for help. Taking an advantage of Karna’s charitable activities, slowly many started to cheat him. Many approached him for false needs, yet he never refused to help whomever approached him. Ramesh was a silent witness to all that happened. Even though he knew that many were cheating his father, yet never mentioned to his father. One day a man approached his father and asked for help. His father helped though he didn’t know him before. Later, Ramesh wanted to find out who that stranger was. After deliberative search, he found that stranger was not a man in need.
Ramesh hastened home and told his father all that he found out about the man whom his father helped. Ramesh bitterly cried before his father because he knew that many were cheating him. Karna embraced Ramesh tenderly with much affection and told him something which changed Ramesh’s life forever. His father said; Ramesh, my son, I will tell what I heard from Abul Kalam when I met him long ago. Kalam knew that I came from a well-to-do family, he said; “Karna, give until it hurts, to save yourself from 99 cheaters don’t make the one who is really in need suffer”. I never understood what he meant. As days passed, I realized the true meaning of his words.
Ramesh’s father continued; One day, a lady came to me for help, she was well dressed. She requested saying, sir please lend me your generous help as my son is admitted in hospital due to cancer in advance stage. I was not convinced of her request. Therefore, I refused to lend my helping hand. Next day, to my shock I read in the newspaper that the child who suffered from cancer died because they couldn’t afford money for the operation. After some days his mother who couldn’t tolerate the pain of her child’s death, committed suicide. Tell me now my son: Am I not responsible for this cruel act…!! Ramesh could not speak a word. Karna continued saying; from that day onwards I decided not to lose an opportunity to help those who are in need. I knew many cheat. Whenever I realize people cheat me, I remind myself of what Abul Kalam told me; Ramesh, there will be worse situation and less virtuous persons on earth. Give to all of them a little of your goodness and surely in return God will reward you. Ramesh, remember successful people build up one another. They motivate, inspire and help one another move forward. I believe those who cheated me one day realize that what they did was wrong. You will never find perfect human but only them who want to be perfect. After listening to his father, Ramesh understood what his father meant and lived his life as inspired by his father.
A few years after Karna died. Till today Ramesh is alive. He lives in Pune. His motto of life is three word: Give, Love and Inspire.
Ramesh wishes that his story will inspire you too!!!