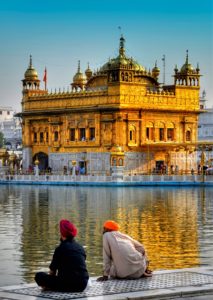 She picked up the fruit; the apple looked wet. Horror creeped in her, when she realized, that it was a cricket ball covered in blood. Surinder Kaur was returning from the Gurudwara, after praying her heart out through the Kirtan, for the safe and long life of the love of her life, Satwant Ji. She looked around. There was chaos. There were screams. There was blood. There was fear.

She ran home, for her family. She ran over the dead bodies of children, and their cut body parts; through the hands, knives, and rage of hungry men awaiting to touch her; under the sun that was setting for a dark future. She reached home, to find blood in tears and tears in blood. The whole family, held her and wailed for her, for Satwant Ji. He had shot The Prime Minister of India, Indira Gandhi. 31st October, 1984.

“Wahe Guruji di Khalsa, Wahe Guruji di Fateh”, rang in her ears. It was past three years, of visiting the jail, and coming back without seeing him, to the same Gurudwara, praying for the safe and long life of Satwant Ji. She was not allowed to meet him, because she was not family. Love had no place. Surinder’s family, had proposed so many other prospective grooms. She wasn’t interested in any. She believed that love had some place. From the moment she was engaged to him, she was his. He was hers. Forever. That day, the guard in the jail shouted at her, that he wouldn’t allow whores. Come as a married woman. She decided to listen to him. She had asked the Gurudwara for permission. She decided to finally marry Satwant Ji, and do the rituals with his photograph. Love had a place to hang on.

2nd May, 1988. Surinder wedded Satwant. Her father threatened her, that he would commit suicide. He accused her for his imminent death. But she believed death was imminent. Her father’s death. Her death. Satwant Ji’s death. She visited the jail as his wife. Satwant saw her after three years. There was blood in tears and tears in blood. With the same blood, he applied the sindoor on her forehead. He touched her wet face. They had less than a year to see each other. Her love was going to a place to be hanged.

6th January, 1989. She draped herself in white. The widow of Satwant Singh. She didn’t cry. No tears, no blood. Just the memories of his touch, voice and feel. Mrs Surinder, made her life work, with her own hands by serving the society, working in the Gurudwara, helping the unprivileged, and spreading love, from her place to the rest of the world. Sikh, or Hindu, or Muslim; Male, or female, or transgender; Children, or old aged or handicapped; sacrifice, or feminism, or love. They all reached her and she reached them.

After long years of her submission to the society, cancer also came to her. He wouldn’t let go of her. Satwant wanted her to come to him. He wanted these years of tormenting separation to end. She believed death was imminent. She hung herself beside Satwant’s photograph. Love hanged on. For Satwant. For Surinder. For ever.