Learning vs Impression Management — A Letter

Remember when we were in my apartment just before graduation and you asked me what I had learned about myself these last four years? We spoke about a bunch of things  — my courses, habits, the people that I met, how they helped me become a better person….but here’s one thing we didn’t talk about.

Remember how growing up you always tried to get me to learn how to bike? I remember this one time when we were on vacation in  Kodaikanal and I knew you were going to bring it up. I faked a stomach ache. Not because I was scared I wouldn’t be able to learn, but I did that because I thought “how ridiculous would everyone think  it is, that a 12 year old doesn’t know how to bike?” Funny I actually learned at twenty one. So that’s what I want to talk about. Well, not biking, but the self handicapping. I’ve realized something about why I do it. And it’s a little…concerning. I always thought it was just about a fear of failure. But it’s not really.  At least, that’s not the entire story. If I feared the possibility of not doing justice to something that much, I wouldn’t be behaving in a way that diminishes my chances of succeeding at it. The more I think about it, the more I realize it’s not about me potentially messing up, but how other people would perceive me messing up. Because if I really cared about what I was doing rather than who was judging me for it…failure would be more …informative. Something that’ll help me be better the next time. Except what really mattered in those moments was the fear of how the failure was going to be perceived — by you guys, my friends….everyone really. I’m far too self conscious for my own good.

Remember that time in third grade when I came back from my singing class crying because I didn’t get selected to perform for the annual show? They selected everyone from my group…except me and this other boy. And when they needed someone for backup they looked at the two of us the way a school basketball captain looks at the last two people to be selected on a team — which one would suck less? They picked him.  I remember crying to you about it and I don’t remember what you told me – but I remember what I told myself. Because I didn’t go back after that. I was embarrassed to face a group where everyone was good enough…except me.. I learned early and quickly that not trying is….easier. If you don’t try you can live in a delusion of ‘if I tried, maybe I would be’ rather than the potential reality of ‘I tried but I can’t.’ If you don’t try, you never risk looking incapable. And somehow…..that’s better than actually doing it in the first place? Well, not better but…more comforting.

What does that mean? It means that  a lot of the times in my life I’ve been willing to lose out an opportunity to learn…learn more about myself and the world just so I can protect an image.  And this isn’t necessarily about big life-changing moments. I’m talking about the everyday things. I’m talking about not asking a question in class sometimes, just because  I cared more about not looking silly rather than actually learning about what I had in mind. I know that might sound like a small thing but I don’t think it is — because every time that happens I give away the part of myself that wants to learn, the part of me that is curious…in exchange for what …seeming smarter? Nicer? More capable? What does that say about how I live my life?

Okay I don’t mean to sound dramatic. And this really doesn’t happen too often anymore.  I have become more aware of it over the years.  If I hadn’t, there’s no way I would have learned how to bike at 21, performed my poetry on stage last summer or do any of the other small things I do daily. But it’s not always that easy.

So there’s this guy who works at the massage center, opposite where I used to work. And  every Saturday on his break he practices tai chi for fifteen minutes. He doesn’t care about whether he looks odd or crazy…he just cares about the practice.  I’m not saying I want to do tai chi in the middle of a mall…well at least not yet. I’m saying saying I want to try this — expressing myself online in a way that hopefully inspires mutual growth.  And I’m not going to lie..it feels weird. There’s a part of me that’s excited, curious to see if there’s people who can relate to stuff I put out there… and maybe there’s people who can’t and I’m curious to know about that too. But there’s also a part of me that thinks that maybe I’ll look back at this and I’ll feel the same way I feel when I look back at a 2007 Facebook post — embarrassed, awkward and pretty weirded out. But I think that’s okay. Because when I look back at an old post, I do cringe. A lot. But I also laugh. And I like laughing.

I can’t wait to see you guys. 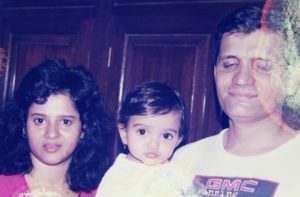