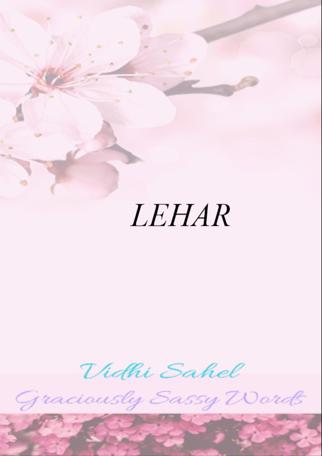 What will you say about a boy who at the age of 15 died with a smile on his face? He made his parents proud, his siblings love him even more while his peers look up to him as an inspiration. The name of this boy is Lehar means A Wave. He lived by his name. A Wave of Happiness for all.

Lehar was an orphan found at the door of the orphanage & old age home named Aasra when he was 1 hour old only. A fierce, happy spirit inside the body of a weakling. The reason he was named Lehar is that he always sent big waves of happiness & warmth to everyone around him. He was not premature yet was too weak almost as delicate as a glass doll, this may be the reason for him being abandoned. Well, Aasra did not find this to be any problem because this little new baby was joy defined. Each & every person living there loved Lehar. The old age home was his favorite place to be ever since he was a baby. Lehar had this unknown power to spread smiles everywhere around him. As he grew up this little one turned out to become a bridge between the orphans & the now homeless old people. All the orphans daily sat with these old people learning new & amazing lessons from the life stories of all the old people.

Lehar was exactly 5 years old when he was adopted by a very kind loving couple Mr. & Mrs. Agnihotri who had everything in their life but even after 10 years of marriage they did not have any kids. Everyone in Aasra was extremely happy & equally sad with this sudden news. Lehar was equal to their lifeline. His new parents were not surprised at this at all because they were very attached to Lehar merely by having three meetings with him. They promised everyone that until they are breathing Lehar will come to meet them all daily for their storytime with the elders. Everyone let him go with very heavy hearts. Lehar was sad too but he also knew that his sadness may in a way mean rejection to his new parents. He let that feeling of sadness be overpowered by the excitement of his parents.

Lehar had settled very nicely in his new big house with a few servants & his Maa Paa. He had his room where he had photographs of everyone he had lived with until now & his Maa Paa too. His warm behavior & the forever overflowing love made him everyone’s favorite including the servants. His Maa Paa also had told him that these servants are like family. As per their promise they took Lehar for his storytime with the elders. Sometimes they would also listen to the stories narrated by the elders. It was Lehar’s 6th Birthday when for the first time he had a grand celebration & was made to feel so special by everyone from Aasra, his parents & everyone in the house plus a few of his school friends also. After the party, he cried hugging his parents in gratitude, he knew that his bond with them just got stronger. That night his parents told him that they will give him another birthday surprise the next day so he slept with this happiness too. As he opened his eyes the next day he ran to his parents & requested them to give him his surprise. His parents said he will get it after school. He was constantly looking at his parents with pleading eyes to give him his surprise soon but every time they only hugged him. He came back from school dancing & singing & was told by his servants to freshen up first. His parents were waiting for him in the garden. He ran to them & saw that they were sitting with a few new plants. They started by guiding him to plant the newbies properly & were explaining each step & its importance too. He was enjoying all this assuming that this is his new gift.

After the gardening session, his parents made him sit between them & started by asking him how would he feel to be a big brother. He was excited, over-limits & answered them immediately that he will be the best brother in the entire world. His parents then told him that he was really very lucky for them & now he will have two more siblings. In the next moment itself, he felt like an elder brother & this made his parents feel immensely happy. For the next nine months, he requested his mother to accompany him to Aasra every day so that his siblings can listen to the stories of his elders also. His mother agreed to him willingly. Everyone in Aasra also was so happy like their family was increasing. His parents were flooded with gifts & surprises by Lehar’s friends too. They were moved by their affection. While the mother was giving birth to his siblings Lehar was admitted to the hospital for severe backache. He apologized to his father for falling ill when his mother also needed him soon after which Lehar was unconscious. The doctors were unable to understand what had happened to Lehar suddenly. Lehar was a big brother to a sister & a brother as well. His sister was a 1-minute elder than the little brother. His sister was named Leela & brother was named Luv. Lehar was unaware of all this while he lay unconscious in his hospital bed. After a week the doctors narrowed down to the conclusion that Lehar was suffering from an autoimmune disease which is in a way obstructing blood flow to his brain. There were no blockages or tumors at all. His life is also going to be compromised. He will die young. On the one hand, Mr. & Mrs. Agnihotri were happy to be gifted with two new bundles of joys; on the other hand, they will be losing their first son. They did not know whether to be happy or sad. Lehar came home fit & fine within two weeks. His joy knew no bounds at all after looking at his brother & sister. He never left their side at all. His health was deteriorating with every passing day but he always wanted to be with his siblings only. When they slept he also slept beside them. He learnt how to change their diapers also so that he could help his maa & spend some more time with them as well. His parents were glad & surprised beyond limits watching his behavior & attachment with the kids.

As years passed by his health got bad to worse to worst due to which his daily trips had to be canceled. He knew that he was ill & had already mentioned his last wish to his parents that was to be remembered always with a smile, nobody shall cry for his demise. His paa came up with this idea of video calling his peers & continuing the story sessions as that were the fuel to his happiness. They had to stop his regular schooling & started home studying for him. Even in this situation, he did not comprise his bond with his siblings. He made sure to interact with them & play with them as well. On the eve of his 15th birthday, he had to be admitted to the hospital. He had asked his parents to be happy & to make sure that his siblings missed him the least. At the age of 15, on the night of his birthday itself, he passed away with a smile. His parents were sure that he would have loved to be helpful even after death so they donated almost his entire body to the ones needing it. His doctors were astonished to witness such a happy patient even in so much pain & so they also agreed to do so.

Lehar was his remembered & missed by all especially by his siblings. They missed his presence in every corner of the house. It was due to this that Mr. & Mrs. Agnihotri had framed Lehar’s photo in two different frames for each of them. The brother & sister always kept him with themselves. It was due to this attachment that both Leela & Luv grew to be sensitive & compassionate. Their brother was their inspiration & motivation too, he had left a big impact on them at their molding years. He was, is & will be the best brother, son & friend alive in everyone till their last breath.

Hello All, I am Vidhi Sahel. A fashion consultant by profession. Hoping to be a writer in future. Writing is like breathing for me. I am attempting to write a story named Lehar here. I hope all of you like it.