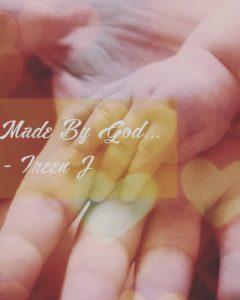 This is the Story of Lilly, Hardworking Middle Class Woman, Who Fights Cancer and Supports her Family.

Lilly was raised in an Orphanage, and it was her Parents who admitted her there. Her Father was an Honest Mason and Her Mother was the Homemaker. As a Little Child she yearned for her Parents Love, Whenever she ran to her Father, who was working on a Building near to her School. He’d not pick her up, but only smile at her. He’ll Lie to her that he will come to see her. Little Lilly wept but she believed her Father’s Word and would go to the Orphanage.

Orphanage Life was never Easy. During Little Lilly’s Time, Only a Meal a Day and Black Coffee with Puffed Rice was served in a Small Cup. That’s what she survived on…

Prayer was her Only Source of Love. Her Strength from a Very Young Age.

One incident which made St. Antony, her Patron Saint was when she Prayed with Faith for a Writing Slate, Because what she had was Broken. After She Prayed, She Slept with Hope that she’ll have her Writing Slate. Next Morn, Just as she hoped & prayed, There was her Writing Slate, in her Bag. It was fixed! This strengthened her Faith in God. And from that Day she was Moulded by God.

Years Passed and Little Lilly had Grown up to be a 23yr Old Young Woman. She had an Unbelievable Glow to her Beauty & Soul! She was in her Final Year of Nursing. She met the Love of her Life. He, who was an Alcoholic and Chain Smoker, became Normal. Lilly had changed his Life by Letting God Influence change in his Mind through her Love.

Lilly and Her Love, John. Get Married despite Troubles. They together raised John’s Nieces and Nephews. Around 1996 they welcome a Baby Boy and Five Years Later they Welcome a Baby Girl.

Lilly was Diagnosed with Cancer & it started to Weaken Her. Her First Fall was when she met with an Accident that should’ve either her Left Leg or her Life. Again, God Saved her, Both her Life and Her Left Leg. She soon Recovers and Works Harder for her Family and Continues to Fight Cancer. She falls the Second Time, when she gets attacked by Fatal Dengue Fever! She gets Saved Again by God, through a Young Man ‘Vinoth’. She recovers from this as she gains WBC count. A Year Later she Operates on her Cancer affected Part, Goes on Chemotherapy, and also begins her House Construction. For Sufficient Funds, She changes Jobs and John voluntarily retires so that they have around 8 lakhs.

After Construction, Lilly Struggled to Balance her Family Needs & Rising Debts. By God’s Grace she Clears her Debts of 4 lakhs.

Throughout this, God Stood by her Side… Because of Prayer, Faith & Hard Work.

Even Now, Lilly Struggles as she Fights Cancer, Stress and Financial Difficulties (she’s providing education to two children!! One is Pursuing Paramedical Course in Radiology and the other is Pursuing UG Degree in B.Com, who’s Planning to Undertake IELTS too!)All this, At the Age of 56! Her Story is the Source of Inspiration for her Family. Especially for her Daughter, who’s Fighting Depression, Anxiety and Suicidal Ideation.

Lilly is Truly an Inspirational Woman, And that is why I Wrote her Story, to Tell the World that God is Everything and He is the One who made Life and Hope!

Lilly is an Example of Strength Made by God!