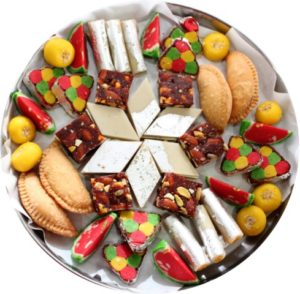 He knew that if he didn’t hurry, his friends would leave without him. Quickly drying his hair with the towel, Farhan ran towards his freshly-ironed white kurta placed on the bed. Even though it was brand new, it looked more or less the same size as the one Ammi bought him last year. For a 9-year old, he was slightly short. But his Ammi always told him, that he would reach the height of his Abba.

Tying his white pajama nada and tucking it in place, Farhan neatly combed his hair. Hearing his name being called, Farhaan looked outside and saw his gang of friends waiting for him. His five friends, Sandeep, Raghu, Aziz, Deepak, and Aravind. They grew up together, went to school together, and even played cricket together on weekends. But today, it was going to be very special. Farhan knew that it was quite rare that something this extraordinary ever happens.

Quickly shoving his bicycle keys in his kurta’s pocket, he ran outside. As he sprinted along, he noticed the faint aroma of ghee wafting from the kitchen. Ammi must be frying the cashews for the kheer, he thought to himself. “Bye, Ammi. I will be back soon.” Without waiting for a reply, he ran to join his friends.

The six boys, dressed uniformly in white kurtas and pajamas, rode on three bicycles. Making their way through familiar and narrow lanes, they told stories, avoided bumping into cyclists, and precariously skirted around women carrying plates of sweets. All this while managing to keep their white clothes spick and span.

On reaching their destination, Farhan and Aziz got off their bike. It was time for them to go separate ways. They pulled their skullcaps from their pockets and wore it on their head. Sandeep, Raghu, Deepak, and Aravind waved to them and cycled away. Farhan locked his cycle against a pole, and the boys started walking towards the mosque. The mosque looked more crowded than usual. Farhan has never seen it this crowded.

Squeezing by adults who are wishing each other ‘Eid Mubarak’s, Aziz and Farhan tried to wedge their way in through the crowd to enter the huge structure, without much success. He wondered if Abba would be crossed that he was late.

Hearing cycle bells ringing and their names being called, Farhan and Aziz noticed their four friends. The boys gestured them to follow. A little further down, the boys saw many people entering a makeshift hall. His friends signaled Farhan and Aziz to enter the hall. The huge hall was filled with over a hundred Muslim men praying. Farhan happily joined in offering namaz.

After the special Eid namaz ends, Farhan saw a group of people pull out sheets of big cloth barricades around the entrance to reveal a large statue. Of Lord Ganesha. The towering sculpture filled the entire hall. Farhan looked around and realized that the hall was in fact a mandal for keeping the Ganapathi status for Ganesh Chaturthi Seeing the majestic statue smile, Farhan couldn’t help but smile back. As he and Aziz walked out of the makeshift mandal to meet his friends, he felt the air charged with the feeling of pure joy. The men were exchanging greeting of ‘Happy Ganesh Chaturthi’ and ‘Eid Mubarak’ and distributing sweets. While Ganapathi’s favourite sweet, the laddus were doing rounds, he saw his Abba and few friends share the most famous dessert during the Eid feasts, the kheer with everyone. It was rare that Ganesh Chaturthi and Eid fell on the same day. But what was extraordinary about it was how it was never about religion. It was how humanity prevailed.