There were problems ever since Rachel, George’s mother died and Richard couldn’t stay here as he had to work abroad . George showed clear signs of dealing with all this pressure and Richard who came to spend a few holidays didn’t knew that it got worse.

George had his reasons to stay alone as he didn’t want to miss another meeting with his mysterious friend, Mr. Rat Dwarf. 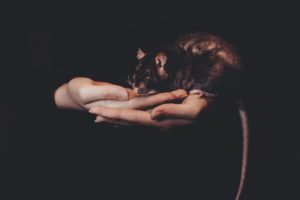 George had this weird obsession with rats. He never missed a chance to play or talk with them. And it all happened on one day, when he was lying in his bed. “Hi, George”, the voice came from underneath and as he tried to look down, “No, don’t look me. If you look at me, I can’t stay here as your dear Rat Dwarf”.

George was puzzled at these strange happenings, yet he was so lonely and didn’t want to lose this chance of having a friend. He said, “All right, Mr. Rat Dwarf, be my friend and I don’t even want to see to believe you. I love rats and I love you”. and then began a ratty friendship between them.

Rat Dwarf came everyday to check on how’s he feeling, how the day went and what he did at school. It also issued new rules such as he shouldn’t play or talk with any other rat. Though it all appeared irrelevant, George agreed as he enjoyed this company.

“I can’t find it”, came the yelling of George, piercing the silence. Richard peeped through the door and asked, “you can’t find what?”. “I won’t tell you”, came the curt reply of his stubborn son.

He couldn’t hear Rat Dwarf for a week and it drove him crazy. When Richard came again and asked,he told that he couldn’t find his pet rat. “When are you ever going to stop being mad about rats?”asked Richard with disappointment. Just then, Richard’s cat, Sapphire ran into the room with a dead rat. George was shocked to see that. He believed, Sapphire killed Rat Dwarf.

He started to stammer, “You’re no good to me dad. You won’t stay with me two days straight and you destroyed the one good thing that happened to me” and began to sob uncontrollably.

Richard came and hugged his wriggling, fighting son, and with one hand took a notepad from his trousers and gave it to George. It had the heading, “Mission: Rat Dwarf, reuniting with my son”. It was overwhelming for George as he gaped at his dad. Richard wiped his tears, and said, “I’m the Rat Dwarf, George”, for the first time I used my technology not to make money, but to make you smile. I had to do it to get to talk to you atleast”.

“You played with my feelings dad. If you’d told the truth, nothing would’ve changed between us but this lie changed everything. How can I ever going to believe you again?”, vented out George.

“I know and I’m sorry son. I’ll make it up to you all my life. Just like you loved Rat Dwarf without even seeing, never judging, give this undeserving dad, a chance to love you, to live for you” and tears ran down Richard’s cheek. George asked, “How many more days will you stay dad?” and Richard replied “All the days I live George, I am not going to leave you again .I quit my job” George hugged him tight, and the warmth of love surrounded as they realised, though they had nothing at that moment, it felt like everything, because they had each other. That hope is life.

Someone who fell in love with words, and even if I couldn't express it right sometimes, it doesn't mean I love literature any less.