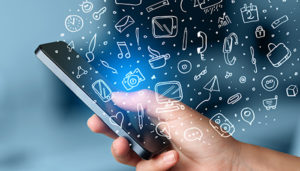 Every morning Piyali, a news reporter joggs for thirty minutes in a garden near her house. Today, she finally decides to talk to the boy she has been observing from past three days sitting  on the same bench. “Hey” she said, approaching from behind the bench. The eleven year old, wearing blue shirt and trousers which looked like school uniform looked at her. “Would you like some orange juice?” Piyali asked. The boy immediately grabbed the bottle and started drinking. After gulping the final sip in an undertone he asked, “I want to go home. Would you help me please?” Without thinking for a second she offered him her mobile phone and said “take this, make a call to your parents.” The boy took the mobile phone and stared at it for few minutes while Piyali waited patiently for him to recall his parents phone number. The boy seemed muddled and questioned, “how am I supposed to make a call with this? I have never seen a device like this before.”Piyali took the phone from his hand and asked him, “What’s your name kiddo Tell me your parents contact number. I’ll make a call to them informing about you.” “Veer” he said, he took a pause and said “4401” and stared at Piyali with his eyes filled with hope. “That’s it, 4401 is my daddy’s contact code” he replied. Piyali could not understand this statement and was thinking that he might have forgotten his parents phone number as he seemed a school going kid.

Suddenly Veer started to run in a different direction swiftly. “Veer” she shouted, “Stop” she yelled. The boy without turning back kept running. Piyali ran behind him. Piyali heavily
breathing asked, “Why are you running?” Veer held her hand and told her to walk with him.
Veer walked her behind some broken old buildings and showed her something which Piyali had never seen before. He pointed towards the huge silver machine which was made of metal and had some broken wires here and there. Veer with his utmost innocence and teary eyes asked, Piyali “Would you fix this thing for me? This is the way to my home” Piyali couldn’t understand anything happening around her, as if nothing of this was realistic. She didn’t say a word and walked towards the machine.
From inside it looked like a computer laboratory with huge screens, some buttons to make certain changes  in the working of the machine and few seats like a minibus. She started fixing those broken wires. “This is a historic travel time machine” Veer explained. “My history teacher takes us to various historical places and that’s how we learn history but this time I got lost and my teacher took rest of the students back to the time from were we came. As I was left here this
machine came back to recieve me but the landing was not proper and it broke.” Finishing fixing the broken wires Piyali with curiosity asked, “You travelled time?” Veer got in the machine and pressed the big button and with a fruity voice said, “Yes, I came from 2040.”

After the biggest thunder Piyali had seen in her life, the machine in a shaky motion landed
somewhere else. She felt dizzy and came out of the machine. The next thing she saw with her naked eyes was unbelievable. “Flying cars?” she asked with astonishment. Veer took her to the outside and said, “Welcome to 2040!”
Flying cars, big flashy towers, foldable bridges, robotic drivers and cleanliness. She observed it all. Piyali said with astonishment, “Never imagined India to be this amazing.”
After making a tour to the city she realised regarding the image which has been created for India in the world dirty they say, technologically handicap they consider, they still say India is a developing country but they don’t realise what is coming in the future. She questioned herself, “Who is showcasing this in the world?” The answer lies within her. “Media” she answered herself. “Why don’t we encourage the youth towards a common goal, why do we always telecast the bad.” Slowly she got all the answers and returned back home with a big smile on her face and waited for next enthusiastic morning to find and motivate youth about something they are already good at, that’s technology.