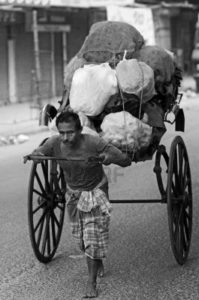 He slipped. He took his time and adjusted slowly.

Now he moved gently without losing the hold and balance, wiped the sweat of his face to his right-hand sleeve caught the handle with his right hand and rubbed the sweat of his left-hand palm on his dhothi. Slowly he looked up to curse the sun who was showing no mercy on him today, he could feel the hot air blowing through his eyes, ears, neck which steadily suck on his energy.

He just blinked his eyes and looked down. He saw his feet, toes wore out, nails were black and crookedly shaped, wounds covered with mud. Then slowly by balancing his hands, he looked back on to the cart which was piled with heavy luggage like a mountain, which should have been pulled by three people at-least.

He slowly turned his head back and saw the inclination of the road up ahead of him which was his next and final hurdle. He felt it was looking at him cruelly, fiercely, waiting to tear him apart, left him with fear, dreadfulness, and helplessness.

He just blinked his eyes. He could feel the pain in his hands, shoulders, waist, and legs. He could feel strain in his nerves, his heart, his thoughts. Then with his heavy eyes and with all the strength which he could gather from hope, he took his position and  a deep breath, pulled his energy from the body onto the handle and pushed the cart with all the force by keeping his head down stretching his hands, stretching his legs and ran 6-7 steps. Then suddenly due to the heavyweight exerted by luggage and caused by the slope of the road which created a thrust on to his handle, which his strength couldn’t resist and he was out of his firm hold, but then in a quick second with the additional strength which he gathered from all his experience he pulled the handle down and by folding his elbows, handle close to his body he started moving up step by step.

At that moment he thought of those days when he was young when he could even pull loads which were 3 times heavier than this, where he could lift 2 bags of rice easily on his shoulders, where he used to work 16 hours and eat 3 times a day, where he used to be appreciated by his owner for his work. Nostalgia crept into his mind when he thought of those young, joyful days where he used to enjoy with his friends, ran and roamed like dogs, fought like cats, helped and shared his sorrows with his fellow companions, his first love. And also he remembered those days where he scolded his parents for not giving him a better life like others reprimanded on his birth, on his poverty, on his fate and all those days he cried before he goes to sleep thinking about his life and all those days where he shared his silence with himself.

He just blinked his eyes and he realized that he is now halfway up the slope and he could sense all of his energy draining away, he could sense the increase in weight of the luggage, an increase in sun’s heat, an increase of his sole burning, he could sense the drops of sweat falling in his eyes, its saltiness irritating and the drop blurring his vision. Slowly moving up he saw the kids playing right side to him, couples walking carelessly barely looking at him, he just turned to a middle-aged guy who is looking at him feeling pity, weighing heavy on his heart, with confusion on his face whether to help this poor old man or not. In that instance, he remembered his middle age, where he always used to be confused, on how his decisions paved his life, thinking of the options he had not chosen which might have made his life better now – pondering, disappointed and rebuking himself on his mistakes, thinking about his wife, his children, his work, his food, his house, his relations and himself.

He cleared the sweat from his eyes making his vision clear, he saw himself in this middle-aged man but he thought that he is in a better position than him as he is not pulling a cart like him, but could see how confused he is. He got angry, felt pity and cursed him, “nikalja saale, kya dekhra ghoor ke” thinking that hopefully, these words would bring clarity to his life. His concentration came back to pulling the cart thinking he is already in the middle of his journey and cannot go back.

He brought more strength from his ego looking at the middle ager, to show that he is not old and still has the potential in him. He pulled the cart further moving step by step even though his feet were skidding in the mud, adjusting, balancing and but always moving forward.

After a few steps… he just raised his head to see where he stood and the end of the slope. He calculated that it would be at the most 10 steps more, then with an optimistic feeling, with the excitement of finishing his hurdle, which filled his heart. He stepped forward without paying attention to the sharp stone beneath his right foot.

His sole hurt very badly. Blood oozing out, he couldn’t breathe for a moment, he closed his eyes tightly, folded his toe tightly making sure he doesn’t place it on the ground, the pain took all the energy from his body, and suddenly he has nothing in his mind except the pain.

Nobody came to help, not even the middle-aged person who was angry on the old man because he scolded ‘saala’ which he felt was offensive.

Then he slowly opened his eyes, he exhaled  very fast, it made him slightly comfortable, but when he slowly released his toe pain tormented again. Now he blinked his eyes rapidly because of tears which he wasn’t under his control, his body started shivering, his eyes, hands, waist, legs craving him to leave the cart, every inch of his body, every thought in his mind pointed to the pain… His mind started listening to his body, he couldn’t bear this trauma, he closed his eyes and at last, he decided to leave the cart, he gently moved the cart up and left the handle…But with an instinct, he held on it again.

His instinct told him that his children abandoned him and his wife alone, his wife was waiting for him hoping that he would get some money so she could cook at-least today as they were starving from past 2 days, the new owner, the son of his earlier owner who always had wanted to remove this old man from work will get his chance and would also ask him to pay for the damage for leaving the luggage, a stomach which craves for food for the last 2 days…

Suddenly he woke up to the present, looking at the end of the slope, he gathered all the strength that was left in him and started moving forward step by step slowly, carefully, cautiously and hopefully.

Then at the fifth step he felt the weight reducing, he stopped and turned his head back. He saw those kids pushing his cart.

The old man smiled, turned around and pulled the cart!!!!!!

P.S: My Intention in writing this story is just wanted you to look into yourself and watch how you are pulling your cart.

“At the end it is SELF-SATISFACTION”