Once upon a time, there was a botanist named Dr. Mastana. He used to spend his day looking after the plants or doing some research works with the plants. He did various inventions. One day while he was sipping tea while sitting in the lawn, some thought came to his mind and he suddenly stood up and went in. He wanted to see how powerful our words are. He took out two empty containers, put equal soil and fertilizer in the containers and then sowed 11 seeds in each container. And now, the real thing was going to happen.

He put those containers at two distant corners. Everything was same in both the containers except one thing and that was ‘WORDS’.

Then came a day, when one small, thin, green sapling sprouted out of the soil. This sapling came out from the set of seeds which got to hear good and positive words. But there was no progress in another set of seeds. A few days passed by, but there was no sign of progress. Whereas, the other plant was growing up beautifully with small flower buds popping out on it.

One day, a small, weak and thin sapling popped out of the soil. It grew but remained thin and weak. Dr. Mastana could clearly see the difference between both the plants. One was strong, tall and beautiful plant with flower buds on it. Whereas, the other one was small, weak and thin. The important thing was that both the plants were given equal water, equal soil and same fertilizer. But the only difference was that of WORDS.

Our words have power to make or to break. Let us choose our words wisely. Every word has a lasting impact on our minds. Be sure to taste your words before you speak them out. Words are powerful and have the capability to do great things.

Let us understand the power of our words with the help of an example. Imagine taking a plain paper and then start folding it. When many folds are done, start opening the folds one by one. When we will open the paper, then we will find out that the paper has several marks on it. And these marks can never be healed once they are put on. Similarly, once when we say the words out of our mouth, they leave a mark and cannot be taken back, cannot be healed. So we should be careful with our choice of words. One good word can brighten someone’s days while one foul word can shatter the dreams of others. We should lift up everyone around us and brighten their days and their lives. We will have to live with the words we said today. 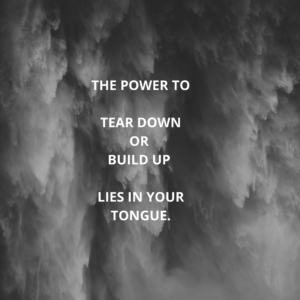