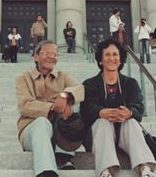 My grandfather and grandmother

My grandfather was not a people’s person. He avoided most family events with his standard response, “they talk about stupid things”.  When he made it out to his cousin’s birthday last year, who he hadn’t seen or spoken to in months, he greeted him with an, “Oh you’ve become fat!”. And so sometimes conversations with him would lead to an argument, which he didn’t mind. But most of the time it resulted people walking away. This annoyed him. “People don’t like listening to the truth,” he would tell us on the way home.

Home meant arguments with my mother and grandmother. So often that we weren’t sure if he was becoming more irritable or if he was just bored. Mom said he didn’t know how else to communicate with them. She had become so used to it that on some days she would just laugh. This was a direct attack on his ego. “You people don’t take me seriously anymore!” He would stand up to leave but couldn’t make it two steps without stumbling. When my grandmother came to help he would hold her hand until he was stable and then pull away “Why did you do that? I can control myself.” When he was diagnosed with Parkinson’s, the stumbling got worse. The only thing he could control was the TV remote and so he switched between CNN and Discovery on good days and when we entered he complained about how people in travel documentaries lacked a life purpose. Most of his time was spent reading a book he ordered from Amazon titled, “Understanding Parkinson’s disease: A self help guide”. When there was something he didn’t understand he would ask Antara or me to look it up. Before his birthday dinner last year he called me to the living room. He had his finger on a sentence.
“Read it out loud”
“At stage five the nerve cells break down further. The loss of dopamine means you will have trouble getting out of bed. Mobility is almost impossible”
He nodded slowly and then shut the book. His hands trembled as he placed it on the table.
He looked up at me and smiled, “I am growing old”.

The visits increased. There were people over almost every week. He didn’t switch the TV off unless it was someone he had not met before. He would listen to them for a couple of minutes, nod and then switch it back on. My grandmother tried to get him to talk more.
“What’s the point? They’re only here because I’m dying.”

He enjoyed the awkwardness that followed his comments.  He would wait until the silence in the room gave way to a comment about the news or the weather and then smile, his eyes still on the TV.

When I left for Toronto that summer he had questions. Two of which I did not have answers to, and one I had the answer to but couldn’t say. It was the usual — “When will I see you again?”
“Soon, I’ll be back in a few months.” I spoke with as much ease as I could.

I didn’t think of whether this would be the last time I would see him, instead I wrote the other two questions down.

When they told me he was in the hospital I prepared myself to be okay with the fact that I wouldn’t be able to witness his last few days. Still, we tried to get a Skype call in, a voice message, something. But when he wasn’t sleeping he could barely open his mouth. And so I thought then that maybe saying goodbye was more about me than it was about him.

I wrote the two questions he asked me again — Why don’t I believe in God anymore? Why don’t I have dreams anymore?