Once upon a time there lived a nice couple who lived happily but had a small unfulfilled wish. They longed for a child than anything else. Furthermore, they visited a sage in nearby village whose blessings always came true. They worshiped him well with full devotion. The sage came to know through his eternal knowledge what they wanted and told them that they would be blessed with an extra ordinary talented beautiful girl who would help the world and bring huge change too. She would be born with a scar on sole of her feet on the new year’s eve.

As the sage had told, a beautiful girl was born to them with a scar of planet earth on her right foot sole. She had blue eyes and dimples on her cheeks she loved playing with stars and planet toys. She always wore a crest jeweled necklace with precious stones on it gifted by her mother. They named her Taara.

Taara was now 3 years old and started her education in a famous astronomy school called Astro-Explorers Academy. She learned about solar system, she got deep knowledge on global warming and ozone depletion. She was really extra ordinary and used to ask difficult questions to teachers who were always fascinated by her knowledge and imagination. She made amazing projects and also shown some interest in medical science as she grew. Now was the time when she had to take her vaccination of Rubella. While taking her injections a thought came to her mind to give an Ozone Boosting Injection to mother earth.

After reaching home, she was looking out of her window staring at the love birds flying in the sky. She tried to imitate the bird’s style of flying on her bed. There happened a miracle. She discovered how to fly. She told her parents and gave a surprise to them. Now she thought that she had got everything needed to give mother earth a wonderful injection.

Taara went to the sage again with her parents to seek blessings for the noble project. Sage was delighted and blessed her with few herbs which can create Ozone Boosting Minerals. She prepared one huge injection and filled with ozone boosting minerals extracted from herbs. Finally she was ready. She took blessings of her parents who were bit scared but allowed her to go. 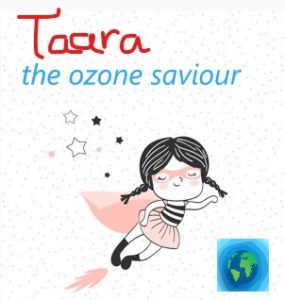 and started her journey, soon she reached ozone layer. She softly called out “Mother earth” and gently gave injection with positive thoughts and love. Then she came back home and saw that environment was much pleasant with cool wind and nice evening sky colours which were never experienced before. It seems mother earth was happy. She decided to become a climate activist for the rest part of her life. She spread huge awareness, people came to know the story somehow. Thereafter she became popular as “Taara, the ozone saviour”

Moral – Lets put our knowledge into actions and and save our mother earth.