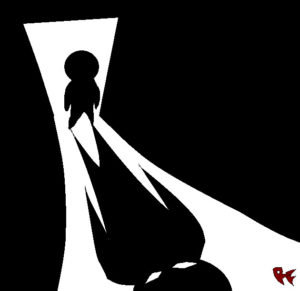 There is a way which seems right to man;But its end is the way of death

It was pitch-black underground sewer,i presume.No beginning and no end:a dark empty world as he opened his eyes finding himself in this deadly black hole. The air was ghostly,the stench was suffocating,it was difficult to breathe let alone survive.Dead mice,dogs,deadly viruses  and bacteria were flowing through the black sewer besides him.Houseflies were swirling around him.Mosquitoes ,bugs were infesting his blood. Death was creeping his soul,the pain,the darkness everything about this place signaled him that he was about to die erupting his desperate emotion as he screamed and cried for help.The cruel desperation to live yet not a  single soul heard his plea in this deadly wormhole”Run!Run!move forward ,search for the light” his soul screamed.Trembling and shaking with fear he mustered up his strength,closed his eyes and ran forward  desperately to find the light.The child ran like a zombie,his legs were bleeding with pain;bugs ,mites followed his naked body it was humiliating ,it was terrifying but he never stopped searching.A hope that there exists light , that he could live;all his hopes hit rock-bottom as he stepped on a slimy-waste and hit the floor losing his consciousness.Time stopped;flies & bugs were hanging, everything just happened to be motionless just like in movies and a hand caressed the boy’s forehead as he heard a gentle kind voice “Wake up child,u fought hard“.He squinted at the ray of light showering him ,as he found salvation from this eternal prison of sorrow.

He saw colors,colors of life:the beauty and the essence of the world under light was overwhelming and extravagant .The boy was gleaming with joy,jumping and clapping ,his tears overflowed with gratitude as he got the chance to live and embrace the light and this world. The crispy scent of fried potatoes,the mild cold breeze,the warmth of the sun,the fountain of colors emitted from the people,everything about this world was magical and visually-serving.All his senses were rejuvenated,he could not control his excitement and approached his kind with the intention to see and talk to them (although he never knew how to speak) but neither he nor she was as excited and uplifted to encounter an ugly naked dark stinky diseased child.Some pretended like he didn’t exist,some ran away , some wore masks while few advised the boy to go back to his parents.He never knew what they were implying yet he was  overjoyed just to see them. Being an abandoned child comes with a set of hazards,even the street dogs hate them;they howled and barked cornering him ,he smiled and looked at them in awe and wonder never judging their intentions until one of the them pounced at him biting his previous wound on the hand as he broke down crying again under the highly intellectual human world.

“WAKE UP SANY ,ITS 6.20 AM“my mom alarmed. I woke up drenched with sweat,my pulses were up high.I took a sip of water and calmed myself up. Barrage of thoughts went through my mind.Was it real? Did the cosmos shift my soul into that poor little child?Is that my past self re-incarnated?Above all ,one aspect of that dream kept bugging me around.Why was i overjoyed;What made the boy so grateful and humble seeing the world and the light while on the other hand why does it seem so normal and dull for me? Questioning my life why am i always depressed?Why am i complaining about things that doesn’t really matter-Greed ,lust , money,power.Turns out that my own human intellect deciding whats wrong and right,whats fun and purpose of life led me turn my back to the creator(God) who gave me so much love.

It led to the conclusion that my own wisdom made me a beggar of life:an arrogant greedy beggar.