Skip to content
Home/Inspiring Story, People/The Child and his Father on that Station

The Child and his Father on that Station 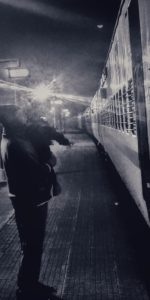 It was past twelve I guess. The train haulted with a jerk. I was into light sleep and that jerk woke me up. Just to know which station it was I sneeked from the upper birth. But couldn’t see anything. So I decided to get down in that shivering cold weather.

I got down of the train stretching. I looked for the signal to go green so that I can go sleep again. I was waiting, and while waiting I saw a man holding his little one in his arms standing a few steps away from me.
The little boy was asking so many questions to his father. To which each and every reply was given.

He first pointing at the journey plate, asked “Why there are two arrows in the opposite directions?”
The father replied, “So that, you come to the same place from where you started, completing your journey. Like after playing you always come home after playing.”
The child stood silent and understood everything.

Then he asked, “How does the train knows to go in which direction?”
To which the reply came as, “The driver, the controller of the train always knows his destination. He’s trained to know his destination. Just like when we go for a ride on the bike and you sit on the tank, I am the driver”. This time he gave a bit confused look on the face.

While I was listening to all of it, the Engine honked!

The kid again asked, “Why and where does that voice come from?”
To which he got a reply as, “The honk came from the Engine and the Engine is run by the driver. He is telling us to get aboard as soon as possible or we will be left alone here.”
The child now gave a look as if he understood things halfway.
The man along with his child got aboard into their coach.

Then I too got my steps up and went straight to the bed.
For another hour I wasn’t able to sleep.
How life makes you see the things.
With such simple examples.
I guess the life wanted to show me that
“You are on a train. The train has stopped on a station. You already know which direction to go. The driver is your Will to do anything. And the train is about to leave. Grab the train or the Will is going to vanish in a while.
Get aboard.”