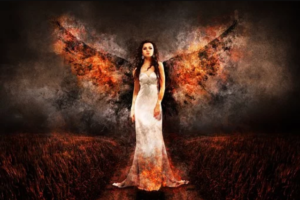 Not all burning fires are aggressive, some also wrap themselves with a cold cover

That morning, she sat on the rock and was admiring the sunrise. This moment had been a dream of her life. Not the sunrise but the peace along.

Shelly, a heart that knows no sin, wished to dwell in peace. Her childhood was so great that she didn’t need to worry about anything. As soon as she completed her schooling, she was permitted to choose the course of her own. She was jumping sky to land as her dream of becoming an entrepreneur is gonna come true.

The first day of college, she entered with great passion. She was so determined to involve herself completely in it. Her college was far away from her home. She stayed in the hostel. From the day of her birth, she was always surrounded by at least four people, but now, only four walls. Though she was so worried about her lonely hostel life, she never failed to put her best. She came running to her room to pack her things to return home after completing her final exams. Her phone was ringing. Her heart started beating fast.

From her childhood, Shelly never wished to hear any ringing sounds like phone, door bell, and similar. She believed that those were the signs of some unexpected change to take place, also an uninformed change. This call was from her dad. She could feel his happiness through his voice. He welcomed her back home after a long while. And added, “You are grown up. Always remember, you are a girl. You are to leave us a day. Welcome that day with a smile.” She was out of words.

She reached her home. “Welcome home bride”, Shelly’s grandma greeted her. Shelly’s heart broke into pieces. She went runny to her dad and asked, “What was grandma saying?” Shelly’s dad said “Yes. In a week or two, you’ll be having your betrothal.” Shelly couldn’t understand what was happening around her. “But dad, you know about my dream more than everyone here. Why do you want me to get ready for this?” Shelly wept.

“Dream..that’s why I made you study whatever you want. This is what I can give you.” Shelly’s dad said in a loud voice. Shelly was trying to convince her parents to the extent but in vain. The preparations were going on at the faster rate. She was out of her heart. She decided to pursue her dream amidst everything.

Next morning, Shelly mom went to Shelly’s room to wake her. “Mom and dad, I know you will be worrying a lot. But I don’t know any other way. This is what I can do to pursue my dream. Sorry for everything. Please don’t take any steps to reach me. With love, Shelly.” A letter was found on her table. ” Let her go wherever she wants to and ask her not to return home.” Shelly dad shouted in anger.

Shelly had only a few of her savings. She set up tuition and educated some children. She also did some other part time job to save money for her masters. She struggled a lot. She was denigrated many times. But she never gave time to listen to those. She was so determined to give her dream a life.

“Today we have the young and successful entrepreneur with us. Hi Shelly”, tears rolled up. Shelly’s mom was so happy to see Shelly over the television. She was sad as well. She went to Shelly’s dad and asked him to call her back home. Shelly’s dad first refused then accepted and asked her to come back home.

When Shelly reached home, her mother welcomed her with huge love. Shelly father welcomed her as a guest just for a formality. She went up to her dad, “I’m sorry dad. I know you would be angry at me. I haven’t done this to put you down. But to raise myself up. Please forgive me dad” Shelly wept. Shelly explained everything to her dad. “Who sets the bound time for a girl’s dream? What if a girl gets married after 26?”Shelly asked in a slow pitch. She explained to her dad about every girl’s struggle in her way to reach the pinnacle. She also added “if not home, who else will understand and stand by us?”

Shelly’s dad started to understand her struggle. He apologized to her for his act. That evening they went on a picnic after a long time, there she admired the sunrise. Shelly was so happy that she had ever been. Shelly thanked her will that made her strive so hard. Finally peace found its way to Shelly’s life back. Shelly, a fire, yet cold enough to console others.