The Dog Who Lived

I rush to the window hearing dog shrieks so loud, shrill and painful that I didn’t realise when tears welled up in my eyes. In an instant a wobbling puppy comes out from under the car when the owner of the vehicle moves it. We went out when another neighbour comes and my dad remarks how cruelly those people have hit him.

“Oh no, I was the one to hit him with a wooden stick in the morning. Every morning it used to poop in front of my house. Now it won’t. Those people were just trying to get him away from the car.”

Me and my dad almost jump with revolt hearing this but it was in vain talking to him.

Surprisingly, a few minutes later two men on a bike arrive and say they have come to take the dog for treatment. Somebody in our street rang them up. I run back to my house to get a spare bed sheet when dad volunteers to take the crew in our car.

Finally dad returns and tells me that the puppy suffered 9 fractures in two of his legs and had a broken tooth. The two people who introduced themselves as Bhaskar and Vikas were sitting in our lawn and writing “Raju” on its plaster which was the dog’s new name. All kids of the had neighbourhood gathered to see Raju. It was heart breaking to see him wagging his tail whenever we offered him food. Mom returned from office and we shifted him under the stairs inside our house because he was the dog who lived.

That night was the hardest for Raju. One of his front leg was covered in plaster while the hind one held was with a bandage. It was very difficult for him to even move. I would get up at night hearing his shrieks when he changed sides while lying but would still wag his tail when any of us came near him.

Bhaskar and Vikas Sir visited regularly. They were not from any NGO but worked independently. Every day they’d get calls from different people about injured street animals and rush to their help at their own expense. They were common middle class men with a heart of gold.  Once Vikas Sir expressed his wish to get an interview on a radio station so that he could make people aware of the situation but couldn’t go as he can’t afford to miss a single day not being there for creatures that need him. It takes courage to get bitten by scared animals time and again yet go out the next day to help some more. I haven’t seen someone so devoted to something when it’s not in their personal interest. Only few people live a life which doesn’t revolve around them and they are the only hope for humanity. 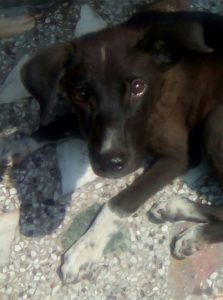 With his plasters removed, Raju on the road to recovery.