It has been exactly a week since the garbage collector has come to our street to collect garbage from the houses. The lady comes in her big vehicle with large dustbins in alternate days. She would give a loud whistle so that people know she had come and rush near her vehicle to dump the garbage in those large bins. She brings a green bin which is for wet waste and a red bin which is for dry waste. Every time, I go proudly to dump the dry and wet wastes separately only to find all the wastes are mixed up altogether in both the bins she brings.

When she did not turn up for the third day, I took my dustbin and threw the wastes into the municipality bin kept in the next street. I just copied this from the neighbors who pitifully do the same without any complaints. I found it very annoying to carry the dustbin and being followed by the street dogs who were desperate about the chicken bone leftovers inside the bin.

Later, I saw the dustbin kept under my sink which is almost overflowing. I took a mental note to clear it this evening if she still doesn’t turn up today and prepared myself as to how to question the garbage collector about her irresponsible and reckless act and shout at her in a tone as high as possible, if I ever get to see her. Then I saw my neighbor, drying clothes in the corridor and approached her to seek support for my debate with the garbage collector.

“How bad this lady who come to collect garbage?. She did not turn up for so long and it is really a tiring job to dump the wastes everyday by ourselves. These people get salary from the Government only to sleep and enjoy at their houses. We shouldn’t leave this and should raise our voices and complaint against her”. I finished my speech and desperately awaited for her comment. She nodded and said Yes, we should and started concentrating on her clothes drying mission. She should have rather said a “No” I thought and silently left the place covering the embarrassment.

Same day around 5 PM while I switched on the gas stove to make a coffee for myself, I heard a feeble whistle sound. I rushed to the balcony to see the garbage lady paddling in her vehicle and reaching the far end of the street. Despite of all the anger and curses that gushed from my brain to mouth, I grabbed my dustbin and sprang to the street. I saw people from every house is holding their respective over bulged dustbins and earnestly waiting for the woman who still haven’t crossed half of the way. As I waited for the woman, I also searched for my support, the neighbor lady, to shoot out at the garbage woman. But I let out a sigh after seeing her husband rushing with the bin and waited alongside the road.

The garbage woman arrived and parked her vehicle under the tree and started clearing the papers and other chunks on the street. Little nervous, I prepared myself to shoot bold questions and a long speech. Slowly, dumping the wastes in my bin, I approached her and started in a low voice.

Hmm..I wanted to ask you. Why did you not turn up for a week almost? Don’t you think how much people would suffer without your service? Skipping one day or two is fine but a week altogether is totally irresponsible. Don’t you think?

Though I kept my voice low, my face expressed all the frustrations and irritation I had over the matter. I see her looking at my face calmly and she sat down just where she was standing.I can clearly see pain in her face and her eyes were red as if she hadn’t slept for months.

Then she told, Amma, I did not take leave or something, In fact, we are not provided any leaves expect for the government holidays. Yesterday, there was a public meeting in South Chennai and our supervisor called us a week before to clean the entire area. Even though we told we need to resume our regular work he did not leave us because a very important political leader is coming so he gave us a lot of work for all these days. Only today he let us to resume our regular work. she caught her breath and gasped.

I was concerned and told her, why don’t you give a complaint on that contractor or tell him his name, I will do it because it also affects us so badly. For a meeting to be held in South whole North cannot stink. Don’t you think so?

The woman told in a shaky voice. She was evidently tired to even open her mouth. Amma, do you think they will take any action even if you complaint? He is a big person and we cannot do anything against him. His uncle is an ex-minister. They use poor people like us for their benefits. He would treat us more badly and don’t even let us drink water and rest in the middle of work. We would be allowed to have food only when we finish the allocated job. We have to keep the roads and sides so tidy. If he sees any papers or something lying on the road he would yell and abuse us badly. But this happens only when some political leader visits. Otherwise, he doesn’t even know if we exist. My younger daughter was caught with chicken flu last week and I requested a day leave but he ruthlessly dismissed and shouted if I take one day leave he would cut off a week’s wage. What could I do when I have 2 mouths to feed and my husband only drinks and sleeps at home. She paused and started starring somewhere at a distance. Then she slowly stood up and started pushing forward her vehicle heading for the next street.

I stood there staring toward the way she gone holding my empty dustbin and a heavy-heavy heart! 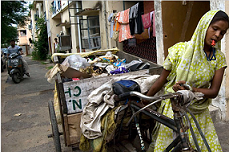