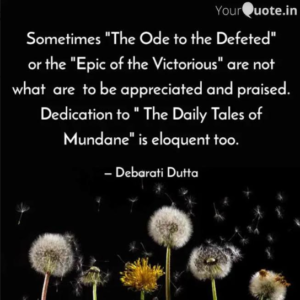 “It’s my great pleasure to call our beloved Principal Mrs. Shovna Basu to the stage to say a few words on her last day at school today!” announced a seventeen-year old school girl with great enthusiasm as the host. Taking the mike from her a nostalgic old woman began, “Good morning to my beloved students, colleagues and everyone present here. To sum up what Abdul Kalam Shiksha Sadan has impacted on my life in a few words is a surmounting task. 28 years ago when I joined here I was told by our respected Late rector Sir Mr. Chauhan, “ Shovna you are young and talented and I want you is to be an efficient gardener to care each leaf and flower of Abdul Kalam Shiksha Sadan to bloom vibrantly, beautifully and spread their essence of love and hard work to create a better place to live around.” and Shovna went on to describe how she had worked day in and out to make the school a family, strengthen the academic structure, create friendly bonds amongst the teachers, students and staffs where people are fearless in pursuit of excellence. She even told how tough days the school had faced which had threatened the closure of the institution due to political unrest and outbursts of fatal diseases. But darkness and light are two sides of the same coin of life and so their Shiksha Sadan has produced stalwarts who were serving in defense, navy, medicine, technology, research and development and myriad sectors of importance in the nation and abroad. Finally, she concludes with Abdul Kalam’s quotes “All birds find shelter during a rain. But the eagle avoids the rain by flying above the clouds.” instilling a dire urge in her audience to delve passionately for taking their school to the zenith of success where the sky is the limit. After her speech Shovna was presented with loud applause, mementoes, flowers and teary hugs from her students, teachers and many.

Driving back home, Shovna couldn’t resist the slow smiling air as she recalled those custodian memories when Rajneesh had made a lifetime sacrifice to help her grow and flourish. Shovna’s father served in army and lived in a small village of Bengal with Shovna and her elder sister who was twelve years her senior. Her mother died during child birth. When she was fourteen Rajneesh saw her at her elder sister’s wedding and fell in love at the first sight. In a month Shovna’s father got her married as the marriage proposal was brought in amiably by Rajneesh’s sister in law. With this unexpected nuptial event, bright and performance driven Shovna’s desire to study any more came to a pause. What Shovna initially thought as a curse was going to turn into a blessing in disguise.

Two years after their wedding, Shovna and Rajneesh have a year-old son. Rajneesh who worked in the Indian Railways was transferred to Madhya Pradesh. However, Rajneesh requested Shovna’s father to restart her schooling. Before he left for his job, he convinced the headmaster of the local school to start her classes from eighth standard once again. Their son too was admitted to the nursery of the same school. Three years flew like a whiff until Shovna passed her secondary exams with flying colours. Rajneesh had been considerate highly to hire a maid for taking care of their son and do all the chores letting Shovna study freely without burden.

After her boards Shovna went to live with her husband where she was admitted in the eleventh standard. Rajneesh left his job. He taught Shovna by himself. In the morning they studied science, in the afternoon he taught her computer and at night they read literature and languages. Rajneesh took immense care of their son, cooked, cleaned the house and took care of every detail of their life needs as a perfect home makers so that Shovna never needed to look back. She completed her masters in Physics and joined Abdul Kalam Shiksha Sadan as a head teacher. With passing years, undauntable Shovna became the Principal of the institution as she worked enormously hard to enhance the education quality, modified the curriculum structure with better and improved technology so that academic excellence of the school was achieved with her golden saying, “I strongly believe that versatile and smart practical approach and applications of theoritical concepts are extremely important to induce exhaustive thinking and research beyond the known boundaries of knowledge.” Her deeds portrayed her in the warmest light of unnerved optimism who prepared leaders of tomorrow.

As she crossed her garden delicately caressed and adorably decorated by Rajneesh, she saw him playing with their grandchild. Like any other day Rajneesh kissed her forehead and asked “How was your special day dear?” She replied happily “Marvelous yet incomplete without you”. She thankfully told him “All sacrifices are not to be counted and banked upon. Some are made just for self-less happiness because the ode to the defeated or the epic of the victorious may not be always appreciated and praised. Dedication to the daily unknown tales of mundane is eloquent too.” With this note of gratitude Shovna joined in Rajneesh and the child in their game and the sun kissed the horizon.

I'm a passionate writer of quotes, short stories and poems. I'm in the final year of my Engineering and have been the head content writer of the core committee team of my academic institution's Students' Welfare Association. You can follow my qoutes at yourqoutes.in on my page : Follow my thoughts on the YourQuote app at https://www.yourquote.in/debaratidutta81 and also at: Great writer alert! Check Debarati Dutta's profile on the YourQuote app at https://www.yourquote.in/debaratidutta