THE INDIAN NOTE – The lives that connects

THE NOTE
PROMPT: A journey of 10 rupees note, where it learns a lesson seeing the lifestyle and problems of each category of people in India. And the story leads to an adventure where the note solves a problem that is linked to many people it met in its journey.

STORY:
The story starts with a deep description of the poverty and education system of India. Where all categories of people are shown based on their economic situations and the power of their positions. All these were described in the note’s perspective. Finally, a ten rupees note is shown in bushes which is totally torn and damaged.

The story starts here with the title, which is the end and start of the film.
The background voice of the note is heard. Where it says that it’s been years since it printed. It saw many people with many problems. And it was very satisfied with what it did at the end of its life. Then the actual story where the note met all the characters in the story and which led to an adventure begins.

A girl travels by auto riksha and gets down by paying 110rs where this note is exchanged to the driver. The very next day the same auto riksha guy gives it to a boy in exchange.
The boy attends his 8th interview and his seems to be waiting for his turn. He gets a call from his dad where his dad keeps on worrying about his future. These were heard by the note. And the interview begins. The main twist is that the boy hears the notes voice. By he won’t get it and the beginning. Such a way with the voice of the note he gets selected in the interview. But he was confused about where he hears it. As he comes to this room he starts talking to his girlfriend. Suddenly he hears some sound from his wallet. A shocking episode and conversation go on where boy and note keep talking. Then they conclude saying that there would be a reason behind their meeting and for what they should find out to do.

Then the note remembers a situation where it heard a voice from a gang star few days back. It’s a case where the gang star gets a deal of killing a girl for business issues of her dad and colleagues. But the murder should be done by the weekend. The note listening address and seeing the girl’s photo. It says the boy to help in saving a girl the next day. And then comes the real situation of rescue. As the boy and the note reaches the spot, they see the girl jumping from the compound wall as there was a marriage proposal in her house. Note recognizes that she is the one. The coincidence is that she was the boy’s girlfriend. Then comes the guys casing the girl. Casing episode happens where the note is missed from the boy’s pocket and feels into the bushes. The boys and his girlfriend escapes and finds a better way to convince their parents for marriage. The rowdies inform their boss about the escape. The boys miss the note which saved his girlfriend. And then the note is shown torn in the bushes where the story started at the beginning. It completely spoils due to the rain on the same day.

After a few years. A kid seems to be doing his homework in his study room. He hears the same sounds coming from his pencil box. As he opens the box the newly printed ten rupees note starts saying hello. The small kid starts screaming daddy… mummy…. His dad and mom walk towards him from the other room. The final twist is that the couple where the previous note helped were the kid’s mom and dad. 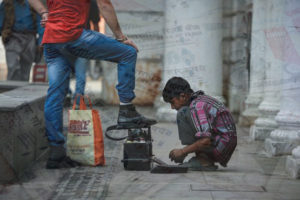 The complete speculative script work is also done with detailed dialogues and screenplay.