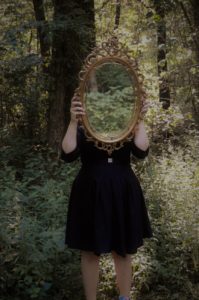 She is a 28-year-old woman, married to Amal just two years ago. She always prefers to be in her flat and does not indulge much with her neighbours. Calm, composed and introvert as one would say. Amal, her husband, is a typical and responsible one, working in a 9 to 5 corporate job, trying to save money to gift his wife a diamond ring on their next anniversary by doing some overtime.

But everything is not that simple as it seems. Through some visual motifs we can sense that she is receiving a text from someone whose number is saved as ‘DIP’ in her phone and it seems that she knows him very well. We see that the boy is trying hard to convince her through SMS to come with him and live it her own way and leave the life she is living in present, i.e. with her husband and the marked boundaries which she is not supposed to violate. Naturally, the girl refuses as it would make Amal suffer and would hurt him, though she knows she is dying inside. When she refuses, the guy changes his approach to convince her, saying that, as in this way she is doing nothing but destroying both of their lives. The girl is hesitant as she knows that taking such a step would ruin her relationship with Amal, also such a relationship would never get social acceptance. Hence, she now, in turn, tries to convince him to let her go, but the boy refuses to do so. Here the moment comes in which she has to take up her final decision, whether to break through the barriers of society, whether to leave Amal and live her life or to stay with him. The guy insists her to pack her bag, as he would be coming to take her to her place, far away from the norm of the rotten set-back society.

The boy is on his way to take her to her place. He stops, lights up a cigarette and again starts walking. After some time, he stops in front of her building and looks up to her balcony. The girl somehow gathers some courage and rushes to her balcony as she could sense him arriving. She looks down when they both catch a glance. She rushes towards her door and opens it but there is no one outside.

Now we are going some time back in the past. The girl is laying on her bed, a diary is kept beside her, where a poem is written. Then suddenly her phone which is kept some distance away from her, vibrates. There is a text from Amal, saying that today he will be late from work. He will be there by 11.30 pm. She suddenly notices that there is another text from Dip and his text conveys that he is a bit upset as she is not replying to his texts. Seeing the message, she replies that everything is okay. This reply makes him offended more as the message seems that he has no right and authority to know about her feelings and that she is hiding something from him. This whole scenario makes the situation more complex which in turn paves him to argue more. He also has the feeling that they are not close anymore. This also makes him think somehow, Amal is his competitor. Dip stresses himself to think about her that when she knew that there is no future of their relationship then why would she initiate in the first place. She consoles him by saying that they are not different but one, that she lives within him and that their relationship is not a burden to her. But he thinks that these words are only to flatter him. At this moment, the girl bursts out in SMS that she is going through a lot of struggle between her emotions and reality. Every day she tries hard to free herself but she cannot, responsibilities do not let her to leave. Dip is that person in her life to whom she can burst into emotions, say everything about her life.

After this argument, Dip convinces her to pack her bag (we return to that moment when she was packing her bag). Same things happen again. He stops and lights up a cigarette and keeps on walking. Again, he stops in front of her building and looks up to her balcony. The girl rushes towards her balcony and looks down, it seems like they both catch a glance. Again, we see the girl running towards her door to see him. Now we see things from the boy’s perspective, that the door opens in front of him but there is no one inside. He steps inside and goes in front of the mirror where he sees the mirror reflecting the image of that girl. Through some visual effects, an imagery is given to the audience and now we see the image of the boy in the mirror. The boy is no one but the girl in a male getup. Suddenly the alarm rings and she looks back at the hanging clock. It’s already 11:40 pm, time of Amal’s arrival. She again turns to the mirror and sees her own reflection.