Skip to content
Home/Inspiring Story, Love/The Power Of ‘No’, My True Inspiration

The Power Of ‘No’, My True Inspiration

“No”, used to be her most favourite word. Disbelief, distress and directionless. Everything she thought and felt, touched her soul in a way that it caused more pain. It was in many ways similar to what I had felt all those years ago. I had been sad. I had been weak. Yet, it was time for a change. For both of us.

However, knowing her I knew that if I had to make things right, I had to inspire myself first. Leaving behind a lot of wrongs, I had started a care-free life, with nothing to lose and wasn’t in the right frame of mind to evolve into this motivational being. Despite my shortcomings, I decided to stay firm and be the man that I could be, rather than who I was or wanted to be.

It wasn’t the easiest choice that I had to make back then. Yet, I knew that if I didn’t do things the right way, she may never even consider fighting for her life. It was the first time in my life that I had done something huge for some else. At that point in time, I didn’t really want anything in return. Beyond a certain point, the care began to transform into love.

Ignoring the fact that those were the best days of my life, I had now grown selfish. I wanted something in return. I even probably thought that it was now my right. Not because I was the best but for the reason that I had stayed back when everyone left. To add to that, I had now become someone else for another person and I was so used to this change and the person who made it happen. She had transformed from my shadow into my soul-mate too, at least in my mind.

Despite all the perfectness of emotions, things didn’t really go my way. Just when I could see the brighter side of things, she said ‘No’. A word that can break hearts and scatter emotions. I had lost myself to me once again. The disbelief, distress and directionless tags were all my to experience now. The worst part was that I had never felt so helpless in my life before. 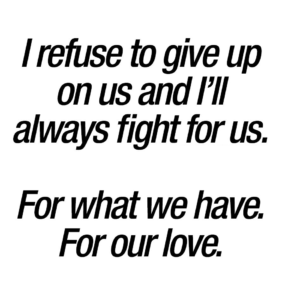 Self-pity was not my thing and though I thought of suicide for a few seconds, I remember the gift of life and my mother’s love. I laughed thinking that I would never be so weak again and I never looked back ever since. My aim in life? No matter how wrong or right I may be, never giving people the right to judge me.

This is what a ‘No’ can do to a failed lover. Endless attempts to change her feelings and thoughts towards me had failed and yet I fought an endless battle. Today, five years down the line, I know I have lost her. However, who has really lost? We will never really know or actually understand now. The reason? We still don’t let anyone judge us!! We are both self-inspired and are self-motivated. The right to tag and untags have all been hidden.

What now barely lasts is the word that started it in all our lives. A blunt ‘No’.