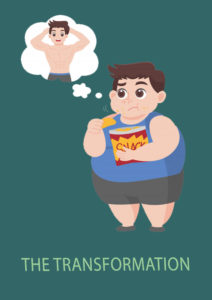 The story started with the number 113 on a weight scale or maybe it started long ago with the several snide remarks from the innumerable people. The Fat Boy moved around with lowered eyes and a depleted self esteem. The society had made sure his confidence was stamped into the mud by the boots of several strangers. The media always looked down upon or made fun of the Fat. So, in order to keep up with his mental health, he read motivational quotes, making them the background on his phone. He wondered how Lord Ganesh being fat was preached reverently while people of this world always looked at him with judging eyes and so, he started admiring Ganesh for their similarities and their dissimilarities, all the same.
Moving away from home for higher studies, he became determined to work on his intellect and started studying about various subjects. The Fat Boy was now accepted by the people. He became part of a vast pool of friends and he loved swimming through this pool that was his life. He refused to let his body become his identity.
The Boy’s parents suffered from ill health from as long as he had known , it scared The Fat Boy and made him think about his unhealthy lifestyle. On those rosy mornings, he loved a girl, with hair too long and smile too bright. She loved him back he thought, however, his heart did break and so these reasons led the boy to develop a strong ‘will’ along with his intellect.
One morning in the month of November when the sun shone bright on his face, he made the significant decision to lose weight. It is not like he had not thought of this before, but the fact was that he had never thought of it with such finality.
When one talks about getting thin, they do not realize the hours and energy this procedure consumes. Physical exercises began and within the first week The Fat Boy lost seven kilograms. Shocked as he was, this furthered his determination.
The process,however, slowed after that, with only a few changes every month, becoming more difficult with time.
The Fat Boy cried alone for hours in misery finding no escape from his incessant craving. After all, he had given up his favorite companion, food. Often when he wished to give up, he would scrutinize his body in front of the shiny mirror of his room and curse himself. During those days, the background display of his phone had changed into gym-friendly quotes.
With friends, he used to act as an observer as they ate his favorite cheesy and chocolate sauces, not being able to be part of the hubbub. People pushed him to have a morsel of food as a morsel could cause no harm, but would that ever be satisfying. So, he went about in-taking the green that he earlier used to ignore and the juices he would earlier not touch.
The struggle was real but the award was appreciated. For one and a half year did the wrestle go on and at the end, he attained his goal, seventy-two kilos.
Now, he stood with his head held high, not just because he was slim but because he had gone through something difficult and had come out stronger. The power of self-control he had learnt and became inspiration of several. Helping his colleagues to follow the road he had taken, he spread happiness. The Fat boy now became The Fit Boy, becoming unrecognizable to most. Even family thought of him as some stranger, seeing him after all those years and strangers considered him admirable when they heard this story.
I was one of those strangers, struck with admiration realizing how restraint could be practiced so resolutely by someone. This led me to become a close acquaintance to the Boy to learn much and apply more in several areas of my life. The Fit Boy helped many in need while I stood and watched him, getting inspired every second of the way. Hearing of the difficulties, I wished to calm him down but he was sufficient at present.
Being a premature baby, he had struggled to exist in the world during the time of his birth and then to achieve his goal and finally to live his life on his own terms. The Fit Boy came through, however unsteady, he had crossed the road.
The Boy is just like me or you as everyone has their own set of hurdles to come through in life in order to become a better and kinder version of themselves.
Thus, a journey of self-help, confidence and patience came to a grateful end, only to await an eager future.

''..a writer is the sum of their experiences.''. On a journey to express myself through the medium of stories as it has always been my language.