Life is strange. We do things we think we know. We think we know what we want from life but we end up doing stuff that was not even back there in our mind.

We come across many people day in day out, and at some times, there is no one at all. Some years are just too easy-going, whereas some days are just like hell. Just one person it takes to put your heart to rest. It need not necessarily be a prospective partner, it could be anyone else.

Jenny was a soul without a body, she could feel things, imagine a life of her dreams, and aspire to be a bad-ass in a positive way but her body would never allow her to pursue anything. Was it a disability of her body or disability of her mind? Was it religion, culture or just plain thoughts? Who cares?!!

We are human beings and the strangest part about being a human is that we don’t respect our innate design for the way it is. We don’t socialise effectively and judge frequently. Jenny was a human being with a small mind, a loving heart and a lean body. She was all she could afford to be, she just couldn’t realise what her true potential was. But someone’s death could just open her up so much so that she could help her connect completely with her true self. Until then she was a dependent limp baby. She did believe in the value system and family orientation but had to constantly confront herself for being the way she chose to be. She suffered from a mid-life crisis at a very young age, even before she was married. She mentally experienced all that happens to a fifty-year-old at a young age of seventeen.

Primarily she wanted to be right in every sense. She had to go through self-healing herself and find a way of her own. It all happened when someone, she didn’t know she loved left for the stars forever. Until he breathed his last in her arms, she didn’t know how deeply she loved him. She went ahead with being practical, being available to support her family during that crisis and getting the funeral ceremony done.

It was a night of turmoil with unexpected emotions knocking at the door, and she had no choice but to respond to them. Life moved on. It opened as many chapters for her to learn from. And every time she got stuck, she recalled whatever her father used to say why he used to say. She began to understand the reason behind his strange silences whenever she fought for life taking risks. So she had to sit down in silence to get along with her father’s thoughts.  Every night had been restless. “How could I let him go?” was the question she always asked herself.

After living so many years after her dear father’s demise, all she wanted to say him is that she loved him as she always did, as a baby, as a teenager, as an adult, as a woman and as a mother. She feels that no father can ever be replaced by any other relationship. 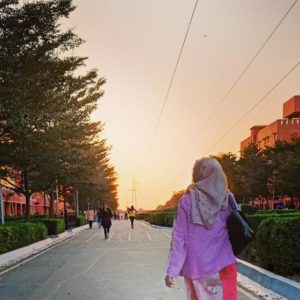