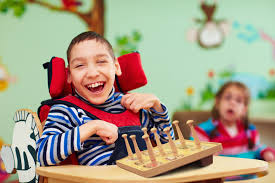 It was a rainy day. Amita Sinha heard the door bell rang. Her nurse opened the door. To her surprise she found a bunch of little children from the Blossoms school of Cerebral palsy. Amita stood in front of them. They started a song. Their voice reverberated into the moist air. Amita joined her students. Their rehearsal resumed.

“Are you sure Amita? They are not like normal people, you should remember that.” asked Mr. Bajaj anxiously.
Amita smiled and looked at the actors of her upcoming dance drama, “Yes sir. I am sure. Please have faith in them.”
Vinod Bajaj sighed and left the place. Amita went back to the room. The children were looking at her surprisingly. Their mothers were sitting at the corner with so many questions in their minds. She smiled and started, “So we are going to celebrate a special day with a beautiful dance drama. Who wants to dance with me?” The room was silent. She closed her eyes, it was expected. She started her story, “One day there was a lion in a forest. He was very wicked. He wanted to eat every animal.” Smile arrived at their lips. Their tiny and big eyes glistened with surprise.
Two months ago Amita joined the school Blossoms School of Cerebral Palsy. She started her job as a dance teacher with a zeal to prove that these special children can do everything rather better than any other. She confronted so many people who had the notion that having a special child is a curse of God and they did not want to let their children go out and experience this world. Amita convinced them and took them out of the darkness. Now the school has twenty children from the slum, ready to lead their country.
On the twentieth anniversary of the school the owner Mr. Rajesh Bajaj said that he wanted a unique performance that would give an impact on the minds of the audience. Amita quickly proposed a dance drama. It was surprising to the other faculty. Since the new students had not faced the stage before. Mr. Bajaj approved her proposal and she started her rehearsal.
One month passed with the story and the casting. The children could not cope with the new environment. They were missing the steps. They were forgetting the storyline. Amita, still, took her patience with them.
One evening her phone rang. It was Neeeaj’s father. “Listen madam, I shall not pay for that stupid anymore. He is not learning anything from your school. Nowadays he jumping, dancing and singing. Where are the books and copies?” his flow of words interrupted with Amita’s excitement, “What did you say sir? Neeeaj is dancing. Pleas bring him to me now. Note my address.”
An hour later Neeeaj stood perplexed in front of his teacher. He was surprised at this sudden visit. His parents were sitting on the sofa. Neeraj’s mother smiled at her child and asked her to dance. But the ten year old boy was reluctant to respond to his mother or to his teacher’s command. Suddenly hus father rose and gave a hard blow on his head. Amita stood surprisingly, “Hey, what are you doing? Leave him, I say leave him.” But the man was unstoppable. He was hitting his son ine after one . The boy, in order to save himself, took a flower vase and threw it at his father. But the aim failed and Amita laid on floor unconsciously. Her head was bleeding.
After a month the dance drama took place. There was a stir into the audience whether they would do it successfully or not. The names were announced. Amita stood at the side of the stage, finger crossed. The drama began.
After half an hour, the hall was silenced. Only a sob was being heard from the front row. It was Neeraj’s father. The actors stood on the stage, hand in hand and bowed down. Every single person in the hall stood and gave clap to the children. Amita hugged her students and said, “Congratulation, you all are winners.”

I love to read a lot and write very little. Dream of being a good and renowned writer lurk in my brain all the time.