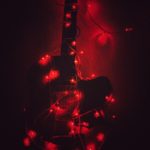 “Staring at his bleeding fingertips, unblinkingly, the 16 year old, Samiksh thought, “It was definitely a mistake that I chose this.” It was his third week in this guitar learning session. Guitar wasn’t his cup of tea, he had realised that on the very first day, but losing to the school band’s guitarist was something he wasn’t ready to afford. Moreover, he feared that if he loses, embarrassment will hug him before his crush, Saachi.

Sachi was fond of guys who were good with guitars and this annual function was his only chance to impress her. He glowered at his red guitar beside him, “You are so difficult,” he muttered. Everytime, he wished to rip the strings off the guitar and destroy the piece of wood, the scene of his mother selling her gold earrings to buy him the guitar wrenched his heart.

“You look glunched,” said the stranger. Samiksh looked at the man. “Ah! I’m your guitar teacher’s friend. I came here to meet him. Everyone is going home, the class for today is over but why are you not?”

“I was about to leave,” Samiksh hushed, getting up from his chair when the man held him by his wrist and pulled him down, asking him to sit.

“Pass me your guitar, please,” He requested. Samiksh noticed that the man had only two fingers in one of his hands. Samiksh looked at him for a second and passed him the guitar as his curiosity reached its pinnacle.

To no surprise, the man struggled through hell as he tried his best to hold the chords. Though, he played the single string tunes, decently. After playing the tunes for a few minutes, he stopped. “I guess, it’s time for me to leave.” He got up from his chair, smiled at Samiksh and ambled his way out, through the door.

“Sir, may I have your name?” Samiksh asked but the man ignored his question. It seemed as he didn’t even hear him. Samiksh asked the question again, in a louder tone. There still wasn’t any reply and before Samiksh could scream his question for the third time, the man was already gone.

“Why are you shouting?” The teacher walked into the room  from the back door.

“Sir, I was talking to that man,” he justified.

“Sir, I don’t know his name. He had two fingers on his left hand, he was wearing a bandana. He was your friend, he sai—”

Cutting him down, he said, “Dharmish. Yes! He is my friend, in fact, my senior from college, he taught me a lot of things during our college days. But few years back in a bike accident, he lost his fingers and his ability to hear,” he paused for a moment. “Life isn’t fair, he loved playing guitar but couldn’t live up to his dreams when his disabilities came in between. It feels really bad when I see him struggling with the chords, now. And then, there are people who are perfectly abled but still wonder if they’ll be able to play the instrument,” he taunted Samiksh. “Anyway, it’s late. Go home and don’t be late tomorrow,” he commanded.

After that incident, something changed within Samiksh. He never looked back wondering if guitar was his cup of tea. And today, after years of that incident and after winning the Best guitarist of the year award for the 3rd time in a row, I would still dedicate my award to that special man in my life. Thank you,” Samiksh ended his speech and walked down the stairs of the stage, tearfully.

From the city of joy—Kolkata. Snehashish is someone fascinated by books, astronomy, and Bollywood. He aspires to become an astronomer, cosmologist, parapsychologist, an actor, and a serial killer at times too.( A writer in short.)