“Baba, please! After such a long time, we have been able to get everyone together. Make sure nothing goes wrong”, said Smiha, her eyes bright with excitement. “Will try my best dear!”, her father, Mr. Bose replied although quite unsure about the outcome himself.

It’s been 2 years almost that the Bose’s have shifted to this new apartment. It was after a hell lot of ups and downs that the family had decided to sell their old flat and shift to a completely new environment devoid of any previous contacts! After all, post Smiha’s unsuccessful not to mention, a disastrous marriage, all what was needed was to move on leaving behind those morose memories. And thankfully, enough, Smiha, her sister, Shria and their parents were able to get a completely new life in their new complex.

With almost 30 families and full of kids, teenagers and people from all the ages, both the sisters started intermingling with everyone very freely. This included arranging snacks parties, fuchka parties, games, drama and several other cultural activities including all the kids and the teens even though they could sense very well that there were ‘invisible’ groups within the complex. Sadly, the differences between the adults were unfortunately coming in the way of the kids mixing with each other as well. Shria was the most active one and with her elder sister, Smiha’s and mother’s help, they were somehow managing to maintain harmonious happiness within the complex.

However, even then, there were frowns from various nook and corner of the complex and often their father, used to get angry and scold them asking them to stop all the activities after rounds of hue and cry during the committee meetings.

Finally, came the biggest festival of the year – Durga Puja. Soon as Shria got busy preparing and planning for the cultural activities during the four days of Durga Puja, quite simultaneously, some tension was brewing up inside the complex. Thankfully, majority of the complex residents were ignoring the malicious attempts of few miscreants within the complex and encouraged both Shria and Smiha to continue with their Puja preparation. Smiha was never quite able to devote time due to hectic work but was always beside her sister but doubts clouded her mind as well. Finally, that day, everyone was called for an open Puja meeting, which her father went to attend.

“So, all good Baba?”, Smiha asked inquisitively as her father returned from the Puja committee meeting.

“Doubtful! Too much negativity and arranging a whole Puja amidst all these is not a cakewalk”, her father replied. “But Baba, last year it was so much fun. The same people participated and it was probably the best Puja we had in our lives. What happened then?”, to which her father could barely find a proper response. Even he was hiding the heaviness in heart due to the heated discussions, arguments, ego-clashes in the puja committee meetings. Just then, the doorbell rang. And there came all the kids running in,”Shria didi, what are we performing this Puja? Which play or skit? And any dance, singing performances?”, Shria sadly smiled and said,” Let’s see”, fighting back her tears.

“C’mmon, we don’t have time. We have to start discussing our program details now itself. Rehearsals are also necessary!”, came rushing the kids’ parents after them. Smiha could not believe her ears. Baba was also surprised. And so, breaking barriers of personal problems and differences, those families joined hands together for making it big once again in Puja that year.

After all, Puja is also about celebrating togetherness. 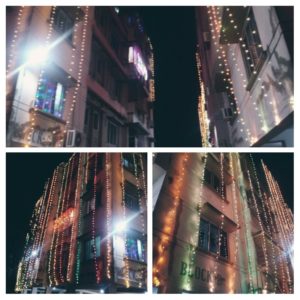