URVEE: FOR A BETTER TOMORROW

“Ganpati Bappa, Morya! … Pudchya Varshi Lavkar Ya!” shouted the villagers with mixed emotions of joy and sorrow as they bid au revoir to their dearest Lord Ganesha.  It was ‘Anant Chaturdashi’. Everyone enjoyed the day to the fullest. Soon the festival was over. It was a beautiful star studded night and the weather was perfect. After a lot of convincing, Krishna finally was allowed to sleep outside the house with his little brother. The gentle breeze immediately put him to sleep. His sleep was soon disturbed by loud crashing noises. He immediately woke up, only to see destruction everywhere. All the houses around him had collapsed. He turned back to locate his dear house but all he saw was a heap of rubble. He understood that an earthquake had taken place. He was safe, just because he slept outside the house. In the blink of an eye, Krishna and his little brother had lost everything that they could call their own.

This incident took place in Latur, Maharashtra on 30th September 1993. 10,000 people died and more than 30,000 people were injured. The hustling-bustling village had turned into a graveyard in a matter of seconds. The sorrow among the orphan kids, the widows and the childless parents could not be fathomed. The bread earners of many families were either dead or handicapped which led to extreme poverty in the village. Reviving the village back to where it was, became a huge task for the villagers, both mentally and physically.

Prasad, grew up in Latur and imbibed a strong will to change this pitiable situation in his village. On pondering over it, he was hit by the hard reality that poor construction may also lead to this destruction.

He further learned that this is the condition of many villages in India.  7 people die every day in India due to poor construction. A human being considers his home as the safest place but that is not always true. Any improperly designed building could cost human life. Around 30% of the rural population does not have proper houses. There are 3 root causes to this problem; lack of awareness, lack of expert guidance and lack of money. Villagers don’t know the role of architects & engineers. They rely on the local contractor who is not professionally trained which leads to poor quality of construction. What could be done to make this situation better?

As Prasad was struggling with these questions, he met Amruta, an Architect. Amruta was concerned about the future of the villages. Earlier, the villagers built their houses using indigenous techniques and bio-degradable, natural & locally available materials. The masons were also familiar with the local construction techniques. These houses lasted for more than hundred years. On the contrary, because of the advancements in construction technology, people in the villages have started building cement houses without proper guidance. Cement is non-biodegradable and costly. Amruta was of the opinion that when villages are blessed with natural materials, why do they want to build cement houses and destroy the environment around.

Amruta and Prasad, still in their twenties, decided to leave the materialistic race for position and be the voice of these innocent villagers. They realized that someone has to do something immediately. The ideologies of Prasad and Amruta came together and URVEE Public Trust was born, which is a nonprofit organization focusing on Alternative Building Construction Techniques for the villages in India. These techniques are sustainable, Eco-friendly, cost effective and give due respect to the context of the village. URVEE team reaches the underdeveloped villages, studies and analyzes them in detail and provides them with construction solutions. The team provides technology and training to the local masons and contractors. Simultaneously the team also trains budding architects and engineers on-site & orient these young minds towards sustainability in construction. 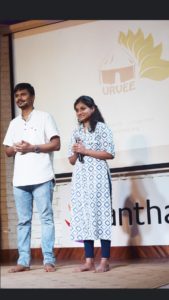 URVEE has started its first project in Ralegan Siddhi, the hometown of Hon. Anna Hazare. The team is on its way to build a better future for the villages of India. It has started its upward roller coaster journey and would reach greater heights if more people come to know about this organization. More and more architects and engineers will take environment friendly decisions and respect the traditional roots of villages. The radical story of Prasad and Amruta would encourage the youth to think beyond themselves and be the change they want to see.

URVEE WILL FINALLY REALIZE THE DREAM OF SEEING EVERY VILLAGER IN INDIA HAVING A SAFE AND BEAUTIFUL HOME WHICH HE CAN CALL HIS OWN.