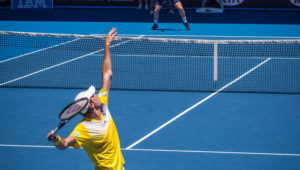 Even in the toughest sport like boxing there is always someone in your corner to guide and raise your spirit, but Tennis is the only sport where you are alone at your dugout. I know you are not able to hear me clearly in the middle of all the voices in your head of self doubt, fear and the loudest of them saying, “You are playing against 8 time tournament champion”.

Trying to wipe the sweat of your face out of habit, you see that there isn’t much as the champion broke your serve twice pretty easily. You look at the calm spectators in the court who were kind of prepared to see the champion have an easy win against you.

As you helplessly stood there match ref calls “Time”.

I know you are not sure what to do? Just breath in and hear me out. The serve is quick, don’t try to play into your opponent’s Tempo. Shit! You are still not able to hear me.

As the rally progressed it came to a close net battle and the crowd cried out in a shock as the champions slice hit the opponent in face. The champion raised his hand in apology and moved back to baseline.

Finally the Hit to your face has calmed you down. Now listen to me, breath in and give your reigns over to me and let me ride.

The serve is little slow and with a swing the ball ended up hitting the wall behind court making a huge noise followed by silence in the court as no one saw where that return came from. 15-All, Ref yelled breaking out the silence.

Don’t look at your racket with surprise, it is us who did it. I am Will , your willpower. Now that you are able to hear me clearly, let’s show this champion what we are made of.

Crowd started making noises shot after shot as each point in the game was trying to be the longest rally in the tournament.With a thundering smash all the crowd went crazy. “Game, 3-1” said Ref.

Yes we broke his serve. Now is the time for our comeback. Even the champion can’t return a perfect ace. Let’s do it just as we did in training.

“Game, 3-2” Ref said as the spectators were on the edge of their seat. The court filled with excited noises followed by sudden silences as the pride of champion and the will of the opponent battled out.

The champion is serving for the set.With another fresh train of rallies,it turned  into the longest game with Ref yelling out deuce for the 11 time. After a 120 shot high intensity rally  Ref yelled ,“Out! Set point to champion”.

What turned out to be a 150 shot rally finally ended with champion’s winner. “Game,Set,7-5” yelled Ref.

I know you are tired. Even with all the efforts we lost the set, but the match is still not over. Believe in yourself. I’m your will and I am as strong as your belief. I will be with you no matter what challenge you face in life.

As the challenger stood for another set, champion did not. Being 8 time champion gave him lot of injuries with trophies.

Everyone thought you were lucky to advance to the next round. But, you know it is because your will never gave up.